Got Based God? Lil B Rips Hotel Over $10K Jacking, More Details Spring Out

Days after accusing a California hotel of stealing $10,000 from him, West Coast rapper Lil B has come forward with more details.

According to the Based God, Oakland Airport’s Red Lion hotel had security check his room and, upon his arrival, he noticed the 10 stacks went missing.

The rapper claims hotel management told him security had entered his room while he was gone … found a small bag of pot, and then asked him to leave. When Lil B went back to his room to collect his things, he says he noticed $10,000 cash was missing. He went to the front desk to file a theft report, but claims the employee ignored him. He recorded that awkward encounter and posted it online. (TMZ)

Based God also jumped onto social media to rip the hotel earlier in the week. 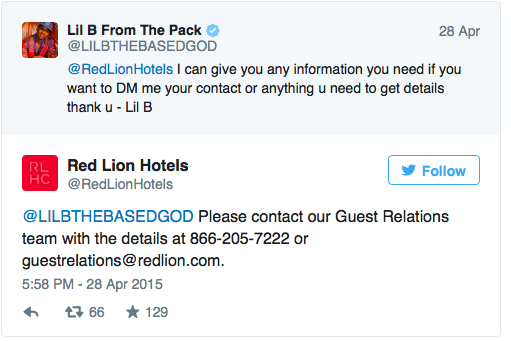 Aside from this, Lil B dished on his curse on NBA superstar Kevin Durant last March.

Send a prayer to all the children who were injured and had to rehabilitate, with time we will find answers to the human body – Lil B

The BasedGod says kevin durant is not loyal and may not stay with okc thunder another year @NBA @NBATV free agency soon? Forgive – Lil B

During an Massachusetts school event last year, Based God set the record straight on KD.