Get In Line: Ice-T’s Not Impressed By Donald Trump, Says “People Are Impressed Every Time Trump Says He’s Rich” 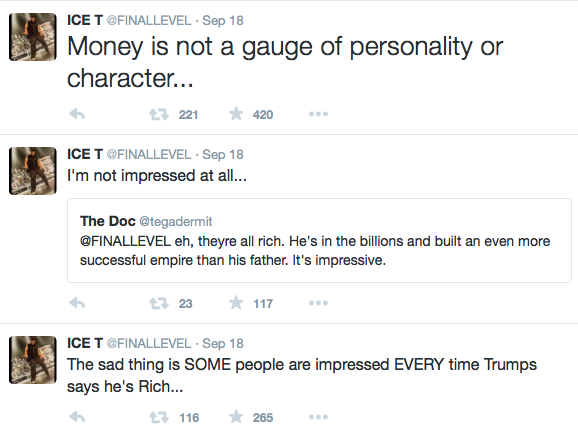 Rich Gang’s Young Thug blasted the idea of Trump running the country in an interview this week.

“Yeah, that’s crazy. What the f*ck? Man, what the f*ck? These motherf*ckers about to let a punk rule? What the f*ck laws he about to pass? … They ain’t gonna let no motherf*cking punk win the election, be the [president]. The president? Y’all gonna clown [President] Obama like that and then let a punk come? No. They ain’t gonna do it. … I don’t know what the f*ck they thinking, like, h*ll no. His self-esteem will probably let him win. Maybe my self-esteem need to be up there like ‘I’m the f*cking president.’ Young Thug for president in the US.” (Clique)

Recently, hip-hop veteran Common said the media had lost some points for giving the controversial real estate mogul so much attention in the press.

“I feel like the integrity of the media is gone in many areas because when you choose to be like, ‘We’re going to show Donald Trump because we know it’s about numbers,’ it’s like, where is the integrity of the journalists who know and will challenge these thoughts so that the American people can see truth and really have a good opportunity – to get behind someone who’s going to matter, who’s going to really be about affecting change and improving this country? And if it so happens to be a Donald Trump – then let the people decide that.” (Huff Post Live)

Atlanta rapper Jeezy hopped onto his Twitter page in July to go off on Trump. 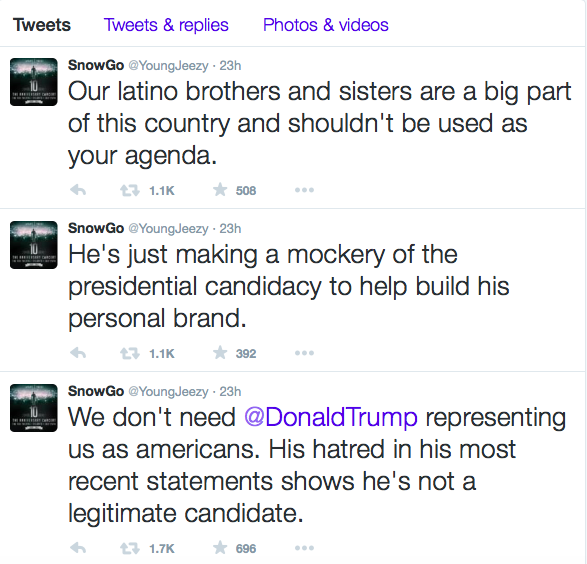