Game Has This Sultry Soul Icon On His Mind These Days

West Coast rapper Game might not be in her league but that’s not enough to stop him from daydreaming about music icon Sade. Back in 2011, rap mogul Nas denied a past Sade dating rumor. 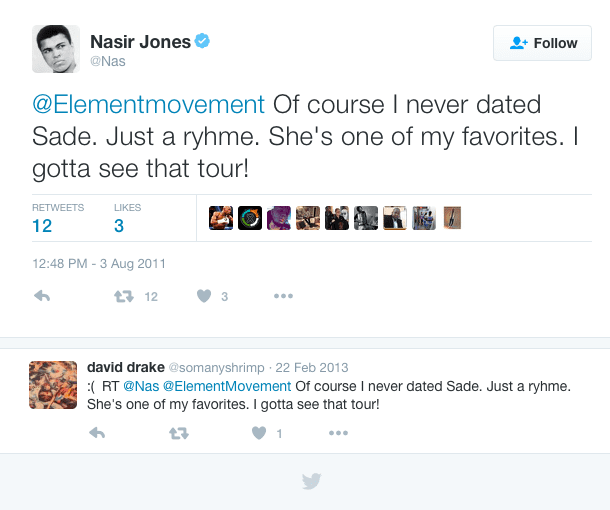 “Pretty d*ck, puttin stitches in they anus/I’m the animal that Hugh Heffner created/The only n*gga Sade dated, the most hated, Nas n*gga” (“Let My N*ggas Live”)

“I do like older women, can I tell you who I met the other day and she was so beautiful, Sade,” Drake told radio host Angie Martinez. “I had lunch with Sade the other day. There were other people around. [I didn’t hit on her,] that would be disrespectful. Just seeing her, she does it for me. I like maturity…Really, I really do love to converse. I love that connection. I do love conversation. I truly do, I love those moments…Once you like, get it off, there’s like, sorry, there’s that 20 seconds after that’s probably the realest 20 seconds of your life. Things like conversation and personality matter in those 20 seconds. And those 20 seconds being the realest moments of a man’s life…” (Hot 97)

In 2010, Wu-Tang’s Raekwon sang Stevie Wonder‘s “Overjoyed” in her honor.

“Yo, what’s up y’all, this is Raekwon The Chef,” he said in a video. “This is dedicated to my peoples, Sade. Yo I love you baby. Dedicated to you, let’s go. Over time, I’ve building my castle of love/Just for two, though you never knew you were my reason, I’ve gone much too far for you now to say, That I’ve got to throw my castle away/Over dreams, I have picked out a perfect come true/Though you never knew it was of you I’ve been dreaming/The sandman has come from too far away/For you to say come back some other day…” (Ice Water TV)