West Coast rapper Game has donated $500,000 out of his own bank account to help in the efforts to end the water crisis in Michigan this week.

Celebrities Diddy, Mark Wahlberg, Eminem and Wiz Khalifa have all united to donate one million bottles of water.

“AQUAhydrate investors Mark Wahlberg and REVOLT chairman, Sean “Diddy” Combs, are teaming with Eminem and Wiz Khalifa to donate one million bottles of AQUAhydrate to the people of Flint. “The initial donation of five thousand cases is making it’s way across the country and is expected to arrive early next week.” The statement added that the company “is working closely with Michigan state and emergency management in a long-term commitment until the water issue is resolved”. (Voice-Online)

“Yes, I sure would,” when asked if she would like to see other artists outside of Meek Mill donating to the water crisis efforts. “It’s wonderful to have that kind of support and getting him involved. I appreciate that. I would like [Michigan native celebrities] as well. You know it would be well appreciated – thank-you so much [Meek Mill]. I sure would like the opportunity to thank him and talk to him. Thank-you so much. I appreciate it, the residents of the city of Flint love you for that. [Am I waiting for Eminem next?] That’s right. Eminem, Kid Rock, Stevie Wonder, Aretha Franklin, Anita Baker. [laughs]” (TMZ)

According to reports, Meek had 60,000 bottles of water sent to a Michigan food bank last week. 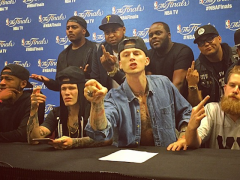