1.6k Views Comments Off on Game Paid Over $60k For This Prince Tribute
Share

According to reports, Game’s epic-looking tribute piece cost him at least $65,000.

Sources tell us Game hired artist Madsteez the day Prince died and asked him to create a tribute piece. We’re told Game dropped $65k on the artwork, which took Madsteez more than 100 hours to complete. The 8′ x 6′ portrait is a combination of oil, acrylic and spray paints — and, as of Sunday, has been hanging proudly in Game’s crib. (TMZ)

Check out the Prince tribute painting on the next page…

The hip-hop artist showed off his pricey artwork on Instagram this past weekend.

@MadSteez I can't thank you enough for this amazing painting of @Prince !!!! This might just be your best piece yet…. My living room belong in @hauteliving magazine now lol… @CrimeByDesign 🔌 it #Prince #MadSteez #Art @therealswizzz I'm coming…. #PieceByPiece #TheTaylorCollection

A few weeks ago, the rap veteran revealed why a Prince collabo fell through.

“I wanted him to get on a song and he was down to do the song, right, so we met at Doug Morris’ office at Universal a few years back and he heard the song and it was one curse word in it and he was like, ‘Yo, I can’t get on that. It’s got a curse word in it.’ … That’s the evolution of people in their lives. You get older, you get wiser. Prince became a Jehovah’s Witness and he stopped – he cut out all that. We didn’t do the song ’cause I needed that curse word. I definitely needed it. I don’t even remember [the lyric] but Prince wasn’t feeling it and we laughed about it again when I saw him, I forget, at one of these BET Awards or something. We laughed about that moment. It was real dope.” (TMZ) 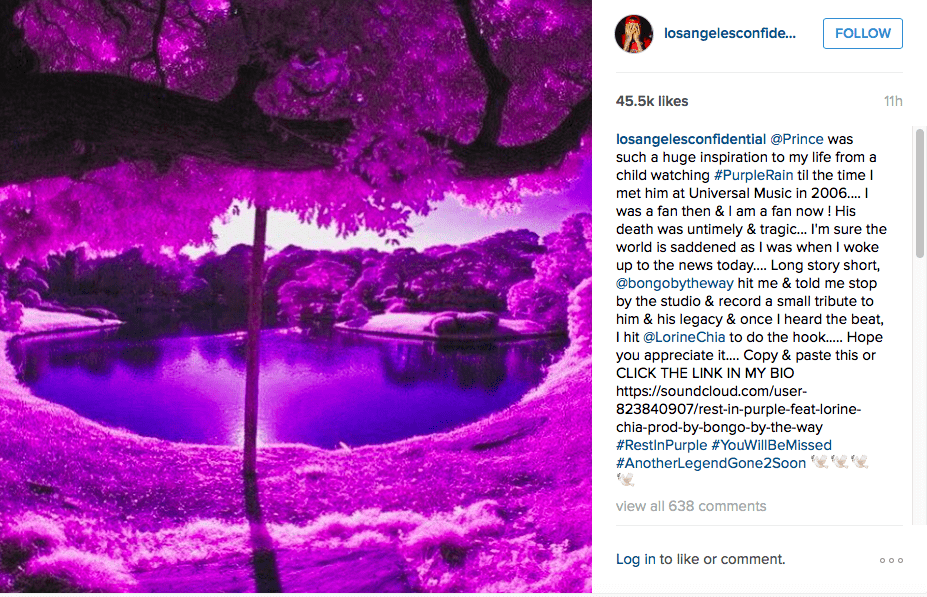 Comments Off on Game Paid Over $60k For This Prince Tribute