Bad Boy Entertainment’s French Montana has confirmed rap star Kanye West is still intent on helping get his longtime friend Max B out of jail.

Although he refrained from going into detail, French said he has talked to Yeezy daily about the Max release efforts.

“We working on something. I want to keep it under the wraps until we put it together. We definitely been on the phone damn near every day trying to put something together for my boy.” (“The Breakfast Club”)

Watch French Montana’s full interview on the next page…

“He’s probably the first one to call me, out of nowhere, when his album just dropped, like an hour after it dropped, and just asked me, ‘What can we do to get Max B out? Let me use my power to get him out.’ That never happened before from nobody. So, I got a lot of respect for him for that because you know how much Max B means to me and the culture of hip-hop.” (Hot 97)

In December, website SupportMaxB.com, had updates on Max’s condition and a personal message from the jailed rapper. 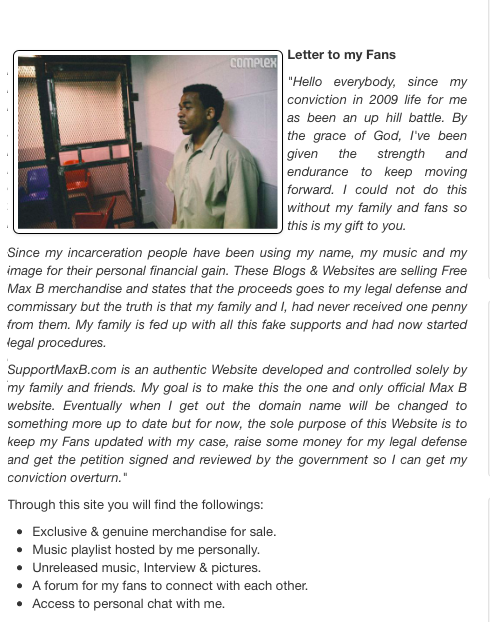 Back in May, Max talked about the possibility of releasing new music once he is released.

“I can’t really see my waves. I only know what people tell me or what family members or fans write me, what people tell me what’s going on. I don’t really see it or hear the songs on radio so I don’t really know the impact my music has until I get back out there in the flesh but, you know, the people listening, I appreciate it, the love is there. I love y’all and thank y’all. That’s what it’s about – I got a nice little catalog lined up. We definitely going to do some things when I hit the town I want to get a double album, I wanna finish the ‘Domain’ saga. That thing is like the Lord Of The Rings, I got about ten of them things – I wanna give them a thing of beauty.” (Revolt TV)