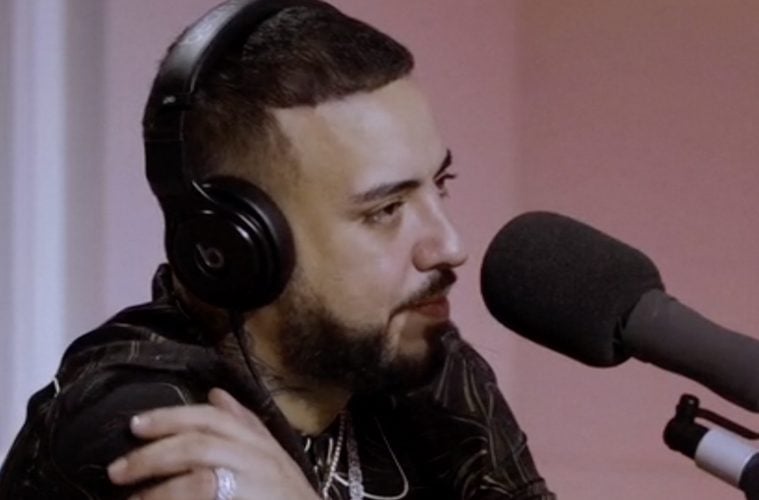 Bad Boy Records’ French Montana is staying busy these days. Fresh off premiering his new “Slide” single, the hip-hop star sat down with Beats 1 radio host Zane Lowe on Apple Music to dish on everything from Drake and Kanye West to the Kardashians and his upcoming new album.

French talks ’Slide’ and working with younger artists like Blueface and Lil TJay:

I feel like with hip-hop now, it’s just like a lot of young cats don’t know where they’re going and a lot of old school cats don’t feel appreciated. It just happened genuinely. I don’t think it was like we planned it out. I’m always tuned in with the young’uns out there. I feel like as far as the young ones especially somebody like Lil Tjay, somebody like Blueface, I feel like there’s this thing that’s been going around that young artists don’t be showing no love to the people coming up. If you go to New York, that’s like the number one topic. Nobody look out for nobody out here. So it’s just like a crab bucket. I remember when Jadakiss first did his feature with me when I came out anything Can Happen in a New York Minute with Harry Fraud. I just remember that feeling having Jadakiss give me a verse and that first step into me becoming a real artist. You know what I’m saying?  That was first experience of just experiencing the dream coming to reality. I always tell him. That was a feeling that I’ll never forget. Even up to this date, I don’t feel the same because that was just like the first real stepping stone. I know that every time that I deal with a young artist this and that, I just know how they feel when it come to things like that. I think people face their own fears. I got nothing to do with their fears. I think sometimes people put their own fears into you and want you to think how they think. I mean in, if it was easy, anybody could do it. I ain’t worried about nothing. That was the first record I came out with.

I’m about like 96% done. It’s just the technical difficulties that come with it. It’s just samples. Sometimes you try to clear a sample that 15 people wrote on it, or like the publisher’s dead somewhere and you know what I’m saying? Yeah, and that’s the worst because they’re waiting until the last minute and you already got your album. This album right here is my best work up to date. I think the space where I’m at and just the experiences … and when I did Unforgettable and Jungle Rules, I felt like losing Chinx, Max B getting 75 years, me going dark hole for a little bit trying to get myself together. Everybody that used to motivate you is not there to motivate you no more. So now you gotta find your own motivation. You know what I’m saying? So, that’s why I think that trip to Uganda … I think it was my first real vacation. Just to see people happier than you with nowhere close to what you got. Then they kind of like play mind tricks on you. So when you get there, you just start learning new things about life. Like you’ll never be rich unless you’re rich at heart. That right there, helped me get over that hurdle. When I dropped Unforgettable, it just showed the famous. With this album, now that Max B about to come home, just that whole process from there to here. It took us like two years, if I’m not mistaken. But, I gotta live it for me to come up with big records like that. You know what I’m saying? So, No Stylist was the first one. You know that’s like, we’re conditioning right now. J-Lo’s is on her album. Just finished a couple records. I feel like me being in there with Harry Fraud and doing the whole album with him, Me and him never really did a full project. that Fraud, that New York, that mixed with a shot caller, that whole vibe, New York minute. Yeah, I’ll play the intro. Let me give you that because I know- I was to bring that New York sound. I just felt like that sound that we had in New York, nobody’s coming out with it. Nobody’s like … it’s tapping back to the shot callers, and to the all the way ups.

He’s working on something that’s so crazy. I think he’s working on something bigger than music. When I went to go see him, he showed me something that was so crazy. But, that’s what make people like him stand out, because he always think outside the box … really outside the box. Shout out to Kanye. No, but definitely he’s special, man. He’s special. Sometimes you be talking to him about something, and he was like, “Yo, I just bought half of the moon.” Like he say sometimes, you be catching yourself like, “Yo.”You know what I love about him? He don’t do things for the money. I mean he do it because the culture we’re in. You gotta sometimes let your nuts hang. You know what I’m saying, like this is what it is. But I don’t think he do stuff for the money. You could tell, because you could see him on TMZ talking about he in debt 56 million. I just see that he’s trying to do something that’s going to change the world. Whether it’s something to help the people, or something like … He want to be [inaudible 00:01:49] He want to do something that’s going to … and the way he think, I feel like he’s going to touch something that’s going to change everybody’s life.

French on playing new track ‘Wiggle It’ for Kanye:

I got this record called Wiggle It. It’s smack. And the whole time I’m with him, he’s telling me about the church and he’s telling me about what his direction with the music is going. The whole time he’s like, “I’m thinking about doing this. All right? You know. I’m in that spirit. You know?” So I play him a couple records. I played a record called Wiggle It. When the record stopped, he said, “What you doing with that record?” I said, “My God. I thought you was going towards Jesus.” This is across the street right here.

French on Max B and Coke Boys:

I was just so happy that I was able to get Max B and Chase on one record together for the Wave Culture.  And me and Max B got another Coke Wave album done. Yeah. So, we about to drop that right after the album.

French on The Kardashians

You just got to find the ways, and especially with everything going on now, the opportunity for you … Just watching Kylie become a billionaire and watching certain people just break certain records, it makes you feel like the land of where dreams come true. You know what I’m saying? I mean, life is like a mirror sometimes. And sometimes a lot of people don’t see the good that they do, like as far as Kim. Me and Kim was talking about getting Max B home from jail. ‘Cause she’s doing the whole thing with …. So, like for her to even reach out and do that I felt like that was powerful. A lot of people don’t see things like that. I was with Kanye two weeks ago, we was just planning on how we gonna do certain things that people might not … You know what I’m saying? Get to know about like what happens behind the scenes. So, it’s not always about making money because the money come and go. But to see somebody do that and to see what they say about them in the press it goes to show you that hate comes from all angles. So, shout out to that family.

I mean I remember when Drake first came to New York and that was around the time when me and Max B was comin’ out with the Coke Wave mix tapes and he was supposed to come see Yonkers to the studio. This was right before he just took off and I guess he couldn’t make it for some reason. Then from there we been like just the closest friends and I call him a friend, so it’s like when I see things like whatever him and Puff had goin’ on, I make it my business to make them meet and solve the problem and then … I just made them meet and I made them meet on a boat in the middle of the water. Definitely, ’cause I know they both great dudes. You know what I’m saying? And they both close to me. So and I told Puff, I say Yo this is what I’m doin’ on my birthday party. I told Drake who was already in a boat that Puff …. I think this happened like that. I mean it was God’s plan. And now look, I go see Puff yesterday and Puff got Drake Maybach and Drake got his Maybach, they traded to see how they feel and this and that. But things like that mean a lot to me, know what I’m sayin’? Cut all the phony out. I feel like and the more people who step up and use they platform to broadcast whatever’s goin’ on ….