Bad Boy’s French Montana isn’t about hurting animals. The hip-hop superstar has shut down the idea of him abusing an elephant he received on his birthday.

French went to Twitter this week and put an immediate stop to the rumors. 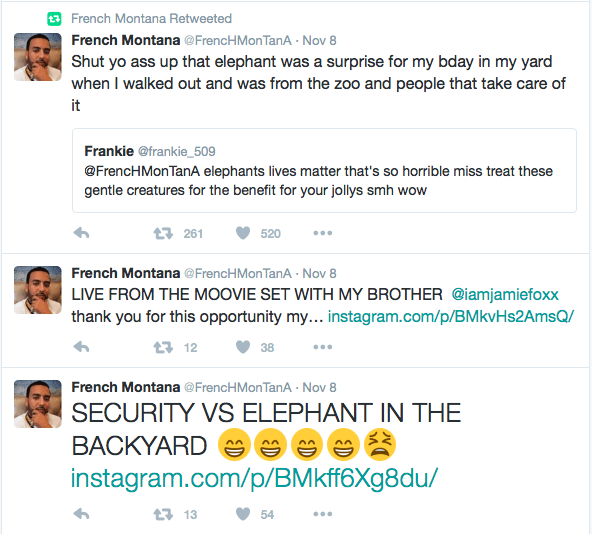 Aside from the elephant controversy, Montana has stayed busy with b-day celebrations.

A few days ago, Montana treated fans to his previously shelved MC4 album.

The new LP features appearances by Drake, A$AP Rocky, and Kanye West. It includes previously shared songs “No Shopping” (with Drake), “Figure It Out” (with Kanye West and Nas) and “Lockjaw” (with Kodak Black). MC4 was originally intended to be released in October but was delayed due to “sample clearance issues and leaks.” It is the latest in French’s long-running Mac & Cheese series. The last installment, Mac & Cheese 3, arrived in 2012. (Pitchfork)

Last month, Montana explained why he had to ditch putting out MC4 as a studio album.

“Songs like “I’m Heated” and “Two Times” couldn’t be cleared. By the time I got the mix how I recorded it, it wasn’t the same. I just ain’t have the same feeling for it. Everybody had to replay shit, and do all this extra shit, so I wasn’t in the mood to put it together. All the music going to come out, you know what I’m saying, just packaged differently. Plus, the album got leaked.” (Complex)