French Montana Responds To Kevin Gates’ Jail Setback: “I Hate Watching The System & All The Hate Killing Us”

Bad Boy’s French Montana is pulling for Kevin Gates‘ freedom. The hip-hop star has sent some words of encouragement to the jailed Louisiana rapper.

French went to Instagram Saturday (March 25) and spoke out against the United States’ legal system. 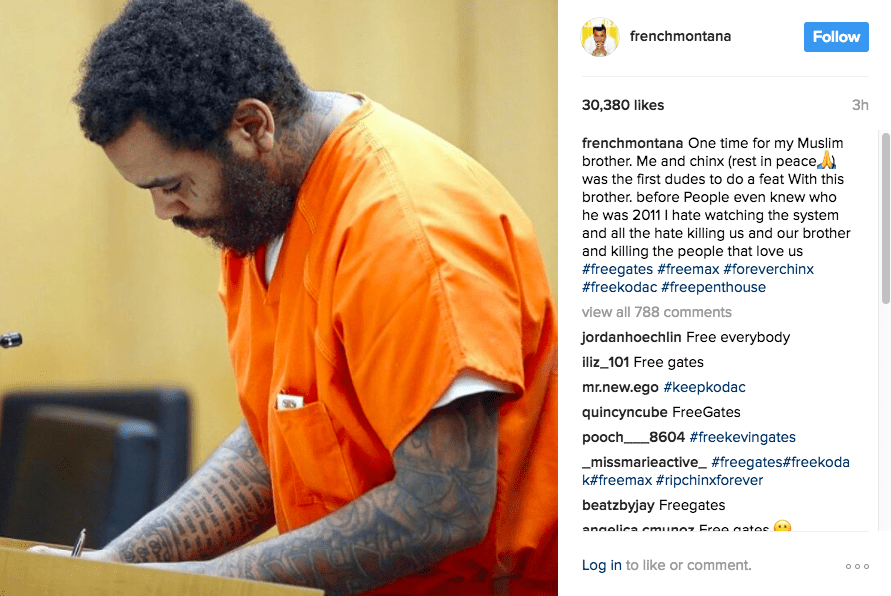 This week, reports revealed Gates had suffered a setback in his jail release.

Rapper Kevin Gates will be returning to Illinois to face weapons charges. The 31-year-old entertainer was about to be released from the Polk County Jail when the Cook County, Ill., felony warrant was found. He had been serving a 180-day sentence after being convicted in October 2016 for kicking an 19-year-old woman during a performance on Aug. 30, 2015, at a Lakeland nightclub. (The Ledger)

In late Oct. of last year, Kevin Gates was sentenced to 180 days in jail for battery after kicking a female fan while performing at a show at Rumors Nightclub in Lakeland, Fla. Now, XXL has confirmed with Polk County Jail, where Gates is being held, that he will be released on March 24. (XXL Mag)

You mean to tell me that @iamkevingates kicked the girl in the red jumpsuit and knocked the breathe out her? Because that's what she's been claiming and testified today in court. If anything her friend choked the fuck out of her. She claims she fainted, but yet she and her friend stayed at the club at the front of the stage even after this incident. She also acquired a civil attorney early on…what does that tell you? She also touched him FIRST (more than once) without his consent but yet he was the one sentenced to jail today for the same crime. She and her friend also had very conflicting stories and were tripped up in many lies today in the courtroom. It was comical and sad at the same time to see how desperate people are for fame and money. Not to mention the prosecutors wanted to give him 60 days with anger management and community service but yet the judge decided to give him 180 days?!? Are you fucking kidding me. Inshallah justice will be served. #unjust #fuckery #polkcounty #smfh by the way, thanks for taking my husband away from our kids (sarcasm) #itsnotoverjustyet