Odd Future singer Frank Ocean‘s brother reportedly was killed in a horrific car crash this past weekend. New reports claim 18-year-old Ryan Breaux was in a vehicle with friend and classmate Ezekial “Week” Bishop when it crashed and caught on fire in California.

According to reports, the fatal crash happened early Sunday morning in the city of Thousand Oaks around 1:30 AM. Both victims were pronounced dead at the scene through the Ventura County Sheriff’s Department.

Deputies responded to a call of smoke in the area around 1:30 a.m. near Skelton Canyon Circle. When officials arrived, the vehicle had been fully engulfed in flames and two occupants were pronounced dead at the scene. The vehicle was severely damaged and hit a tree before getting cut in half on impact. (CBS Local)

Despite the crash making headlines, law enforcement did not immediately identify the victims. Details have since emerged and confirmed at least two people died from the accident.

The initial investigation revealed the vehicle was traveling south on Westlake Boulevard approaching Skelton Canyon Circle. The vehicle appeared to leave the roadway and collide with a tree in the center median. The identity of the occupants is pending notification of next of kin by the Ventura County Medical Examiner’s Office. The collision is still under investigation by the Thousand Oaks Police Traffic Bureau. (Nixle)

“To my brother, who was talented beyond belief, possessed a heart of gold, had an energy that was infectious, a smile & laugh that lifted everyone’s spirit, and was a loyal and authentic friend to anyone he knew. You were just getting started and ready to show the world who you were. You were a leader and you had a whole army of loyal soldiers behind you. Thank you for being there for me when I needed you most, thank you for all the wild nights, thank you for your music and all the late night studio sessions with Fray, thank you for blessing us ALL with your presence on this earth. I will carry you in my heart always. Until I see you again brother. Ryan Breaux forever & Zeek Bishop forever.” -Paris Brosnan’s Instagram

Just earlier this year, Ocean made a rare social media appearance due to another tragedy, the death of Kobe Bryant and his daughter Gianna. Frank dedicated Instagram Story posts dedicated to the beloved athlete and his child.

Frank Ocean fan pages paid homage to Ryan Breaux with throwback pics of him and his brother.

Comments Off on Frank Ocean’s Teen Brother Ryan Breaux Reportedly Killed In Car Crash: “You Were Just Getting Started” 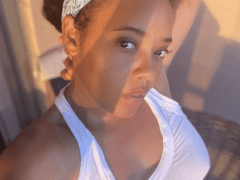