The cause of the death of New Jersey rapper Fetty Wap's daughter has been revealed. Four-year-old Lauren Maxwell passed away in June due to a heart problem.

The details of Maxwell’s passing have been made public. The cause of death on her death certificate cites fatal cardiac arrhythmia, which is essentially an irregular heartbeat, due to complications of congenital cardiac anomalies. She had the heart defect since birth.

The rapper and his ex Lisa Pembroke’s 4-year-old, Lauren, died from a fatal cardiac arrhythmia due to complications of congenital cardiac anomalies … this according to the death certificate. Essentially, that means she’d had this heart problem since birth, and the resulting irregular heartbeat killed her. According to the document, obtained by TMZ, Lauren passed on June 24, 2021 … at her home in Riverdale, Georgia. (TMZ)

The tragic death of Wap’s daughter was confirmed as true this week. It was first reported Lauren passed away last month, and Maxwell’s mother and model Turquoise Miami have now confirmed the passing of the 4-year-old on Instagram. She noted they were both in mourning, but did not reveal the cause of death herself.

This is my amazing, beautiful, funny, vibrant, loving, talented, smart and hardheaded princess mermaid Aquarius. If you see this post scrolling by with her comment or just say to yourself “ i love you LAUREN ”because they say that souls can feel your love #rip.

“@wayneout1738 Respected my wishes to keep her off the gram. The internet had very negative energy towards our child which bought me distress reading, So please stop any negativity towards him. Lauren love her daddy too just like she love me and He mourning hard just like me”

In other news about Wap, New Jersey’s own has officially been back on his music grind. Fetty Wap pulled through in late April with fellow musicians Imanbek and Morgenshtern for their “LECK” remix.

Kazakh DJ and producer Imanbek has gained worldwide popularity over the past year for his monster hit “Roses” that has now had over 1.2 billion streams and a Grammy award for best remixed recording. Now the trio are joined on the single by MORGENSHTERN, a 23-year old rapper also from Russia who rose to prominence as a full time Youtuber and then embarked on a music career, shooting into the public eye with numerous big collaborations including the 2020 single ‘Watafuk?!’ with Lil Pump.

The New Jersey native is determined to pull through for his state. In January 2021, the hip-hop star stepped up to speak on the importance of making the Garden State proud with his music career.

The Paterson native hit up his Instagram page with some major reflection. Fetty said he saw himself being the greatest of all time from Jersey.

In early December 2020, Fetty reflected on how much success he enjoyed over the year. 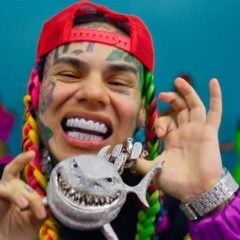