Terror Squad leader Fat Joe has had a moment of clarity. With everyone joining Colin Kaepernick in his stance against the national anthem, Joey Crack feels a different type of way.

In a now-deleted Twitter post, Joey Crack explained why he could not stand up for Kaep’s position.

Fat Joe decided that today was the day he was going to share his position on fighting against social injustice and the right way to fight for racial equality. According to his tweet, it’s disrespectful to kneel during the national anthem because it disrespects the soldiers that have fought for our freedom. In sharing his views on Twitter, it appears that Fat Joe also forgot to use spell check. Joe immediately deleted the tweet and followed it up. (Black Sports Online) “I love that there’s freedom of speech and he can stand up for what he believes in,” Curry said in an interview with CNBC’s Sara Eisen. “There’s going to be people that disagree with him and there’s going to be people that agree with him, which is what I think our country stands for, which hopefully will drive the conversation to bettering the equal rights and treatment of African Americans and people of color. So I applaud him for taking a stand and hopefully the conversation is about what his message was and not, ‘Is he going to stand or is he going to sit for the national anthem?’ … The conversation is started and should continue.” (SF Chronicle) 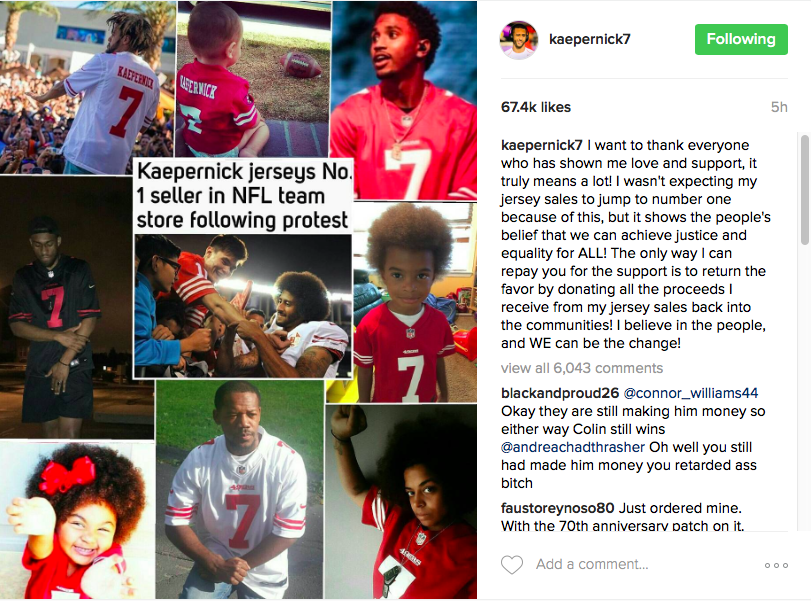 Over this past holiday break, Dreamville head J. Cole showed his support for Kaepernick at a live concert by rocking a jersey.