Fabolous Admits He Left Interscope Record Deal: “Decided To Stay W/ Clue & Go Back To The Streets Thru His Mixtapes”

New York rap veteran Fabolous has gone back down memory lane. Days after celebrating the 15th anniversary of his Ghetto Fabolous album Loso revealed he left his first deal with Interscope Records.

Fab went to Instagram last night (September 13) and said he put his career on the line to give his loyalty to longtime mentor DJ Clue in the early 2000’s. 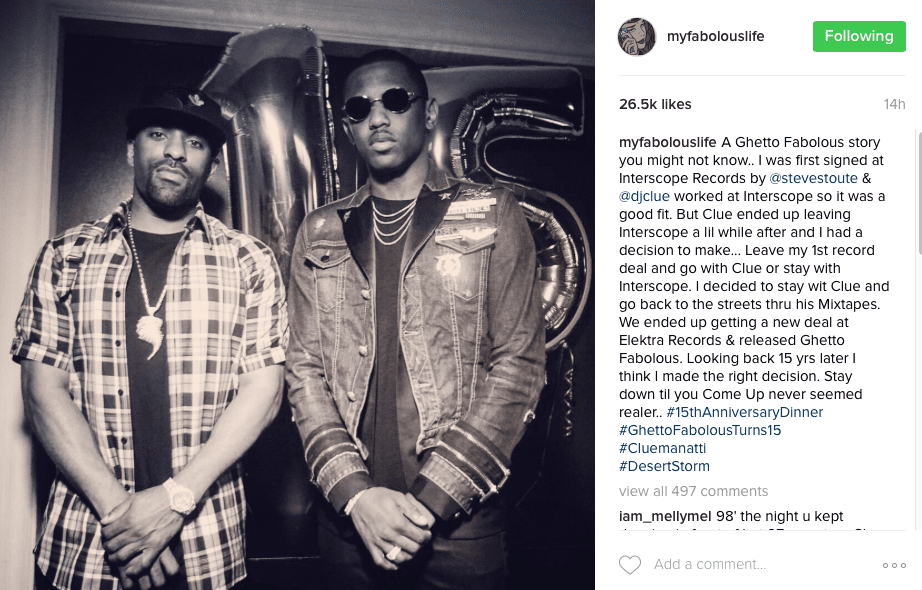 Don't know how I would've celebrated my 1st album's 15th Anniversary without the 2 guys I came in the game with. They're known as Webb & Cheo but these 2 are my brothers, my family, my niggas thru it all! Them being my 1st management wasn't thru paperwork, (shit I can't remember if I even signed anything & if I did it ran out a long time ago) it was thru BOND. Thank You for everything including being there to celebrate a milestone of my career. #TheFamily [shot by @justgerard] #15thAnniversaryDinner #GhettoFabolousTurns15 #StarPowerManagement

The voice.. Pain In Da Ass!! The Pacino voice on "The Bad Guy" was none other then @therealpain456. The song was inspired by my love for the movie Scarface & Pain came wit the classic Al Pacino lines to tie the song together. I low key tried to find you for Loso's Way album but couldn't in time. But may have to bring you back for some Carlito lines for Loso's Way 2! Til then, Thank You my G. #15thAnniversaryDinner #GhettoFabolousTurns15 #PainInDaAss

The most personal song on #GhettoFabolous was "One Day".. Done by @producedbyomen, this was the 1st time I had rapped on a beat that had feeling in it.. Told a little of my story on this one. Thank You Omen. #15thAnniversaryDinner #GhettoFabolousTurns15

@thelilmoshow has been there for me even before Ghetto Fabolous. She put me on Superwoman (her request) because she heard my freestyles on the Clue Mixtapes & wanted me! She had done songs wit Missy, JayZ, Ja Rule & more..But she insisted on ME! From there I knew what kind of person Mo' was. You also were apart of "Take You Home" on Ghetto Fabolous because how could I not make you part of my 1st album when you helped me get there. Thank You Mo'. Love 4 Life. #15thAnniversaryDinner #GhettoFabolousTurns15 #DuttaDuttaDuttaDuttaDuttaDamn

Earlier this week, Fab reflected on his 2001 debut, Ghetto Fabolous.

My baby.. 15 years ago today my 1st album released on Sept. 11th 2001.. A 23 yr old kid from Breevoort Projects in the Bed Stuy section in Brooklyn, NY got a chance… I didn't know much about making a album but I did know I had a opportunity to change me, my family & friends lives. Ghetto Fabolous sold over a million records & was my 1st Platinum album but what made it special to me was the grind, the industry innocence, the learning process, & the fans who came along on the journey with me from the Clue mixtapes to Ghetto Fabolous. Thank You to @djclue, @duroceo, Skane & Desert Storm. Thank You to Sylvia Rhone & Elektra Records. Thank You to all the Producers & Features. & most important Thank You to all the fans who was down & stayed down!! #Happy15thAnniversary #GhettoFabolousTurns15 #GhettoFabolous

DJ Clue also talked about the album’s significance on his own career.

15 years ago..The first artist I ever signed to My 1st Record Label "Desert Storm" ( @Myfabolouslife ) released his Debut Album "Ghetto Fabolous". Definitely was a life changing experience when years of work finally come to fruition & keeping your promise to an aspiring artist..trying to make their dreams come true. Shout to my partners @DuroCeo & #SkaneDolla . Definitely can't forget Cheovision & @Crimsoncross . Shout to Interscope Records & @SteveStoute for signing us ..even though things didn't fall into place..& Sylvia Rhone & Elektra Records for seeing the vision and putting out the Album. As well as everyone who helped along the way. We still Rockin! God Bless