In this episode of Empire, all charges have been dropped against Lucious, someone is trying to extort Cookie & friends and Andre confesses his sins.

As the episode opens, the Empire staff is gathered around the conference table as a CNN breaking news story announces that the charges against Lucious Lyon have been dropped after the body of Vernon Turner was “found.” As payback, Lucious fulfills his promise of bringing Andre back into the Empire fold, bequeathing to Andre the helm of his new gangsta rap label, Gutta Life Records amidst a ratchet, THOT party. Andre uneasily looks on.

Latin protégé Laura, who enamored Hakeem with her angelic voice as he moped over liquor in the last episode, is officially inducted into Lyon’s Dynasty by Tianna, who takes her to the studio. Laura quickly questions the relationship between Tiana and Hakeem but Tiana brushes it off telling her that Hakeem really believes she can “blow.” (double entendre).

R&B superstar Ne-Yo guest stars as himself and coaches Jamal on his vocals and whether he should bring his boyfriend, Michael, on tour despite Lucious’ advice to leave Michael at home.

Meanwhile, Andre meets with his pastor to discuss how Lucious has tempted him by giving him the helm at Gutta Life Records. The pastor tells Andre that God may be using him to bring his family into repentance. The pastor suggests that Andre confess his sins to his family and invite them to his baptism.

As Tianna waits for the elevator in the lobby at Lyon Dynasty offices, two girls walk in pretending they are fans. Suddenly one of the girls spits a razor from under her tongue and attempts to slice Tianna’s face. The girls wrestle Tiana down and snatch her bag. Tianna is shaken as she recounts the story to Cookie and Hakeem. They are all shocked when they are shown a Youtube video from the thieves as they are scavenging through Tianna’s bag. Cookie realizes they’ve been “marked” as the thieves threaten more assaults upon Lyon’s Dynasty unless a bounty is paid.

As Andre and his wife Rhonda unpack belongings into his new Empire office, Andre announces that he’s getting baptized and would like his family to attend.

Cookie and Lucious, Vernon’s only “next of kin,” have Vernon cremated. Cookie questions if Lucious had Vernon killed, which Lucious denies – knowing it was Andre who killed him. Lucious jokes about Cookie’s recent robbery and Cookie wonders if Lucious has anything to do with her new troubles.

Thirsty informs Andre that he is replacing Vernon and that Lucious wants him to find a way to steal Lyon Dynasty’s new music. Andre responds and says he won’t do anything to hurt his mother and kicks Thirsty out of Lucious’ office with a stern warning.

Jamal decides to take Michael on tour after a huge blowup on the issue, however, this feeling might change after Michael succumbs to the sexual advances of the eclectic artist who painted Jamal portrait.

At a Lyon Dynasty office party, Hakeem attempts to hit on Laura as she and the girls party with him. Abruptly, whe pushes him away and tells her that she’s not one of “those” girls.

Cookie and her new promoter are meeting in the office when they hear a loud crash. The two emerge, guns drawn like Bonnie & Clyde to find two thieves attempting to steal masters. The thieves tell Cookie that Thristy sent them as they scramble out of the office with Cookie’s pistol trained on their backs.

Andre invites his brothers to his baptism. During his invitation, he confesses that he set up Jamal in the studio to get robbed. Hakeem forgives him quickly and agrees to come while Jamal is reluctant to step into a church for fear of being scorned due to his homosexual lifestyle.

Continuing with his “true confessions,” Andre tells Lucious that he told Cookie to blackmail him and that he attempted suicide. Lucious pokes fun at Andre’s baptism and tells him to “man up” because there is “no God.”

Hakeem chases down Laura and apologizes to her, vowing to never hit on her again. Freda Gatz, the first artist signed to Gutta Life, gets a personal in-studio coaching from Lucious who calls her father a “rotten bastard” and tells her to channel her pain into the song. This seems to inspire her and she spits her 16 much better. 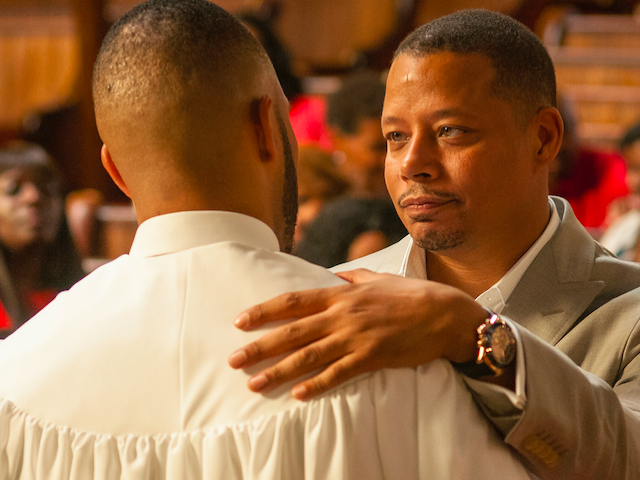 At the church, Andre is heavy-laden as he attempts to confess Vernon’s murder to Cookie as he waits to be baptized. Cookie, Hakeem and Jamal sit in the front pew of the church when Lucious saunters in. As Andre is immersed in the pool three times, Lucious looks on painfully as he has a flashback of being abused in water by his mother when he was a child. Visibly uncomfortable, Lucious walks out as Andre, Cookie and the family look on, embarrassed.

The show ends with Hakeem jogging in Manhattan when three goons grab him and stuff him into a van. Hakeem is kidnapped. As he is dragged into a van – in broad daylight – one of the kidnappers says, “I warned you, get down or lay down.” [OMG! Does this mean Beanie Sigel & State Property will be on a future episode of Empire?]