If you need to catch up on what happened last season, you can read those recaps here.

In the second season premiere of Empire, we finally meet the infamous Frank Gathers (played by Chris Rock) and we shake our heads in disbelief that Boo-Boo Kitty’s twerk needs work.

The second season starts off with a massive outdoor concert/rally to raise awareness about the corruptions of prisons. Think #BlackLivesMatter meets Free Concert In Central Park. The people are outraged and holding signs up that say “#FREE LUCIOUS”, but Hakeem isn’t particularly happy about having to participate considering he believes Lucious killed his Uncle Bunky. Cookie reminds her young son that the concert is about impressing Mimi, a potential investor and taking over the Empire. from Jamal.

Watching the concert from his cell, Lucious has the prisoners taking orders from him. Cookie’s cousin Jermel, who appeared in Dangerous Bonds from season 1 episode 5, wants to speak privately to Lucious to get protection from Frank Gathers who is about to touch down on the prison grounds. Jermel tells Lucious that Frank Gathers could be trouble considering that Jermel killed Frank’s right hand man Teddy MacNally for Cookie. Lucious, still holding a grudge against Cookie doesn’t want to hear it and waves Jermel away. Lucious monitors the television as Cookie is on the screen canoodling with wealthy investor Mimi Whiteman and frowns.

Frank Gathers, Lucious’ former boss, touches down at the prison in cuffs with a crew of muscled up felons at his beck and call. Gathers walks through the prison hallways and the orange suits part like the Red Sea — until he collides face-to-face with Lucious. It looks like it’s about to pop off but the two exchange mutually respectful pounds and walk their own way.

Next Page: Boo Boo Kitty Takes One For The Teams And Twerks To Save The Empire 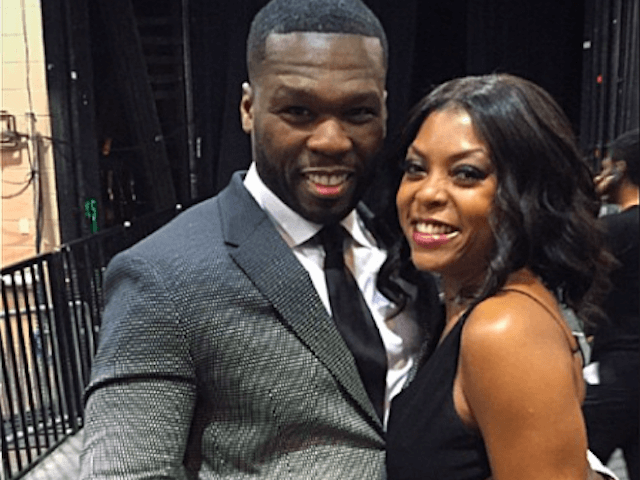 As Cookie walks through the halls of Empire, Cookie questions Hakim to see if 50 Cent is still taking shots at Empire and calls him a thristy ass. [LOL]

Jamal is overwhelmed with all of the things that come with running a company as he is approached by his brothers and various personnel. Jamal visits Lucious in prison and complains that running a label doesn’t allow him to get into the studio and finish his upcoming album. Lucious questions where Vernon is and tells Jamal he needs to “handle” him. Lucious gripes that Cookie hasn’t come to see him since he’s been in prison, which Jamal answers with a cold stare. Finally, Lucious questions “who was that lesbian bitch” at the concert cuddled up with Cookie. Jamal is clueless, so Lucious instructs him to find out.

Andre wakes up in a cold sweat from a nightmare of him and Rhonda digging a grave for Uncle Vernon. Remember, they killed Vernon in the season 1 finale. As usual, Rhonda works to keep Andre calm and focus on the bigger picture — the Empire takeover that Andre and Cookie are planning with investor Mimi Whiteman. And don’t forget Rhonda is pregnant.

Back in prison, Frank Gathers corners Jermel and questions him about killing Teddy McNeilling. Jermel denies any involvement. Frank invites Jermel to have some food.

Cookie has thrown a sexy party full of scantily clad women for Mimi, who Lucius calls a “lesbian bitch.” Anika aka Boo Boo Kitty steps in to talk about the music business and suddenly captures Mimi’s lustful attention. Mimi questions why they want to get rid of Lucious. Mimi invites Anita to dance with her. At first, Anika is reluctant until Cookie orders Boo Boo Kitty to dance and lose the sweater so Mimi can see her curves.

[NOTE: Anika really needs to work on her gyrations.]

From prison Jermel calls Cookie and tells her he needs protection from Frank Gathers as well as herself and her kids. Cookie’s assistant Porsha tells her that someone sent her some ugly flowers but it falls on deaf ears. Cookie’s sister also calls Porsha warning her about the flowers but Porsha has to go to the bathroom so she hangs up on her.

Ambitious prosecutor, Roxanne, arranges a private meeting with Lucious and offers him a deal to get out of prison — snitch on his comrades. He scoffs and calls her a “black bitch in cheap shoes.” Roxanne threatens to put her cheap shoes in Lucious’ yellow ass.

During visitation hours, Frank Gather’s daughter spits some rhymes for him in the visiting room. Lucious overhears it and compliments her.

Just as Jamal is doing a presentation before the board, Cookie, Andre, and Anita barge in while Hakeem rolls in on his Segway hovercraft. Cookie announces that, with the help of Mimi investing in them, they are removing Lucious as CEO in a hostile takeover. In a surprising twist (literally), Jamal teleconferences Lucious into the meeting, who reveals that he has cut a better deal with Mimi; foiling Cookie’s takeover move. Mimi gives Boo Boo Kitty an A for effort for sleeping with her, but it just wasn’t enough.

Sitting across from Frank Gathers with bruises on his face after an apparent prison beatdown, Jermel reveals that it was Cookie who ordered the hit on his right-hand man, Teddy MacNally and that it was ultimately Cookie who snitched on Frank to the feds to get out of prison early.

[NOTE: Originally, the character of Frank Gather’s was a cannibal. The original scene has Frank eating parts of Jermel. Source]

Cookie comes home to find a big black gift box tied with a red ribbon sitting in front of her door. Cookie’s sister is in her house waiting for her and reveals that Frank Gathers has sent her his signature roses. Cookie opens the gift box to find the severed head of Jermel. Panicked, Cookie calls her son Jamal and tells him to get to Lucious’ house immediately for his own safety. Cookie finally visits Lucious in jail. Cookie tells Lucious that Frank Gathers is messing with them and she needs him to fix it.

Frank calls Lucious over for a visit. Lucious offers to work out any problems they might have. He even offers to sign his daughter to Empire. Frank states that his beef is with Cookie, not Lucious and tells Lucious to stay out of it or get killed. Lucious looks around and sees that he’s outnumbered by Frank’s goons. Just when you think Lucious is going to sell out Cookie, he stands up for her and tells Frank if he’s got a problem with Cookie, it’s with him too. Frank orders his goons to kill Lucious fast and quiet. As Frank is leaving, Lucious tells Frank that he’s confused. Frank notices that his goons are moving due to the fact that they now work for Lucious. Lucious order his new goons to kill Frank – loud and long. As Lucious leaves, he tells Frank that he still plans to sign his daughter to Empire and “slip her the bone.”

Back at Lucious’ house, Jamal, Andre, Hakeem and Cookie’s sister wait anxiously for word on their fate. Cookie emerges and tells them the coast is clear and that the Frank Gathers threat is over. Everyone is relieved — until Jamal tells everyone to “get out of my father’s house” as revenge for their failed takeover attempt. Cookie slaps him twice for disrespecting her. Jamal looks her dead in her eye and says “You done now lady?” and closes the door in her face. Behind closed doors, Jamal weeps.

So what did you think of the season 2 premiere of Empire?

What did you think of Boo Boo Kitty’s twerking?