In tonight’s episode, Lucious tells Anika and Cookie what they want to hear, Andre pulls the trigger and Jamal “roars” out of the closet.

We start off with a flashback scene seventeen years earlier of the Lyon’s family in the courthouse lobby waiting to hear the verdict of Cookie’s trial. The officer advises Cookie to hug her family now, because once the verdict is handed down she’s going straight to the pen. Cookie tells the boys she’ll never stop loving them and kisses an infant Hakim. Lucious sadly serenades his wife with his song, “You’re So Beautiful.”

Back to the present, Cookie wakes up in Lucious’ bed the morning after their “reunion romp.” Hoping for round two, Lucious presses Cookie who offers a signature snarky retort: “You want Cookie’s nookie, ditch the bitch” (aka “Boo Boo Kitty aka fakeass Halle Berry aka Lucious’ fiance Anika). And as an extra bonus for his commitment to her, Cookie tells Lucious she will make him “immortal” and explains her idea of a “Legacy Album” featuring Hakim and Jamal on remakes of Lucious’ hit songs. Lucious looks Cookie in the eye and says, “I’ll do it.”

In a Catholic cathedral surrounded by candles, Hakim is found on his knees praying for his father’s recovery. Jamal walks in and the brothers decide to bury the hatchet for the sake of their dying father. And for the sake of Lucious, Jamal decides he will withhold coming out of the closet until after his father passes, while Hakim agrees to get along with Cookie.

With the visual of Lucious and Cookie’s affair fresh in her mind, Anika confronts Lucious with the knowledge that he had her father collude with him to certify that Lucious had a “clean bill of health”. Lucious tells Anika that he did it for the IPO to which Anika threatens that she will take the company down if her father is caught. Then Anika tells Lucious that she knows he slept with Cookie. Lucious is visibly shaken — and it’s not an ALS attack. “Lying Lucious” claims that Cookie took advantage of him and tells Anika he wasn’t trying to hurt her as he softly touches her hand. To prove his love for her, she gives him an ultimatum — “Marry me tomorrow.” Lucious verbally stumbles as he attempts to buy more time and tells her he’ll marry her next week after the upcoming Empire White Party. Reluctantly, Anika agrees but tells Lucious he must make the announcement at the White Party. Lucious looks Anika in the eye and says “I’ll do it.”

Vernon and Andre conspire together to move Andre into the CEO position. In order to do this, they must get the six member board to vote on it. Andre goes thru the list of board members and requests that his wife sleep with Janet Blakeley, a former model and one of the board members who has a thing for blonde women. “Baby Bib” Rhonda agrees wholeheartedly. While coaching Hakim in the studio, Hakim has a falling out with Cookie. Lucious demands that Cookie and Hakim talk to each other. Hakim tells Cookie he feels that she loves Jamal more than him. Cookie vows that she loves him the same and they promise to get to know each other better.

In the studio alone, Lucious makes a move on Cookie. Cookie reminds him that he has to cut off “fake ass Lena Horne.” She slaps him. He likes it. They kiss and proceed to turn on the mixing board with their writhing bodies as their “Legacy” single plays in the background.

Andre and Rhonda visit Janet Blakeley and her husband to garner a vote Andre will need to become interim CEO if and when Lucious is incapacitated with ALS. Janet’s husband saw a picture of Rhonda and wants a piece of Rhonda, while Andre will entertain Janet. However, Janet’s husband is elderly and confined to a wheelchair. Rhonda reneges on the deal she made with Andre to seduce the board member’s geriatric husband for the vote and proceeds get drunk. As the geriatric husband proceeds to hit on her, Rhonda vomits — at the dinner table — into her dinner plate. In a sobering ride home, Rhonda tells Andre she’ll no longer be his “geriatric whore” and that she’s done with him pimping her out for the sake of his come up.

Lounging on the couch with “Cougar Camilla,” Hakim tells her he’s done with their “mama” role play game. She agrees and tells Hakim he needs to “upgrade” himself to be a boss like Diddy, including a more mature dress style and the last position on the “Legacy Album” song. Camilla gives Hakim a crisp white jacket to wear to the White Party and Hakim responds that he will “come out” with their relationship at the White Party.

At the Empire board meeting, board members hold a vote to appoint Andre Lyons the interim CEO of Empire in case of Lucious’ demise. The vote proceeds around the table, with Andre garnering a 3-3 vote. [Take a guess how Janet Blakeley voted.] With Lucious holding the tie-breaking vote, he looks Andre dead in his eye and votes an emphatic “No.” Vernon and Cookie are shocked. Andre stands frozen. Lucious walks out.

At the White Party, Cookie broaches Jamal about moving Hakim to the end of the song — a consolation for Hakim who she wants to grow her relationship with. Offended, Jamal asks to be taken off the song. To avoid conflict, Cookie decides to put Lucious on last part of the song. Somehow, Jamal senses that Lucious and Cookie are sleeping together and warns his mother to be careful because “Lucious is incapable of loving anyone but himself.”

On the white carpet, Anika and Lucious make their entrance. With Cookie looking on, Anika announces to guests that they should wait for the “special announcement” later that night. Cookie pulls Lucious to the side to question the “special announcement” and he lets her know he’s riding for #TeamBooBooKitty. Later, Cookie slides up on Anika, gives her a phony “congratulations” and drops her own “announcement” — that she and Lucious had a second “reunion romp” on the studio mixing board the day before. One-up for Cookie. [Meow!]

Hakim strolls into the white party with Camilla on his arm and introduces her to Cookie. Immediately incensed, Cookie goes in on “Old Camilla,” who she says is taking advantage of Hakim’s “mommy issues.” Hakim looks on helplessly. Camilla tells Cookie that since he’s not getting the closing spot on the Legacy track, Hakim is off it altogether.

Jamal Roars Out of The Closet 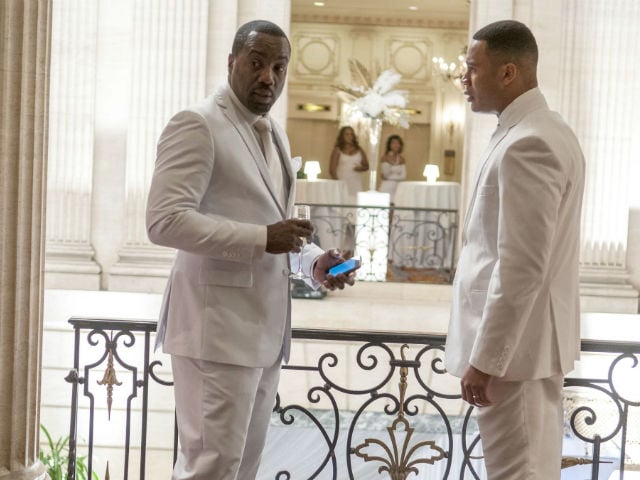 As the White Party continues, Lucious takes Jamal to the side and encourages him to perform “his” rendition of Lucious’ hit song, “You’re So Beautiful.” Jamal takes centerstage, and with the crowd surrounding him, he gleefully belts out his remake, complete with new lyrics that say, “this the kinda song that makes a man love a man.” Uncle Vernon, Cookie and Hakim applaud that Jamal has finally come out, while Lucious stands frozen and speechless and looking sick.

Vernon and Andre confront Lucious about his “no” vote. Lucious viciously tells Andre that he voted against him because he doesn’t trust him and the “white woman” he married. Andre responds that Lucious hates him because he’s excelled academically and is not musically talented. Later, Andre is shown sitting alone in the Empire studio. Apparently broken and depressed, he lifts a revolver to his temple and pulls the trigger. The gun fails to go off and Andre collapses in despair.

Anika is shown in front of a tall building. She removes her engagement ring and walks to the building where she stops at the concierge desk and asks to see Billy Beretti — enemy of Lucious and Empire. [Could this be business? Pleasure? Or both?]

Wearing all black and still reeling from Jamaal’s “coming out” the previous night, Lucious tells Cookie that the Legacy album is off.

Did you see tonight’s episode? What do you think? How many times do you think Andre pimped out his wife? How did Anika know where with Beretti? What is Vernon prepared to do to secure the Empire CEO seat for Andre?