Tonight’s episode of Empire revolves around Lucious Lyon attempting to sign a rival label’s biggest rapper named Titan. The secondary story line surrounds Jamal’s  defiant move out of his $15,000 a month loft to a hole in the wall spot in Bushwick, Brooklyn.

Lucious wants Hakeem‘s album to drop on the same day that Empire goes public, however, Hakeem hasn’t been working hard on music — as usual his agenda is partying and girls. Lucious points out that the game’s biggest rapper, Titan, has a better work ethic and challenges Hakeem to play on the same level. Cookie interjects, telling her youngest son that he’s not about that life and his best song to date has been No Apologies because it came from his heart. Meanwhile, Hakeem brags that he has 4 VIP passes to a Titan concert. Lucious confiscates the passes and gives them to Becky, his assistant, as an early birthday present. After Titan’s performance, beef pops off, Titan shoots a rival and is arrested.

Hot pop singer, Tiana, is impressed with the song that Cookie picked out for Jamal to perform in Episode 3 — so impressed that she goes to Cookie  for her opinion on the new song that she recorded.

Anika walks into the bathroom at home to discover Lucious’ hands trembling as he attempts to shave.   He confesses to Anika that he has ALS and that he doesn’t have much more time to live.  Anika takes the razor from Lucious’ hand and proceeds to shave him as her eyes get glassy with tears.

The next day, Cookie announces at a staff meeting that she is now managing Jamal AND Tiana. This new discovery doesn’t make Anika happy. Realizing they don’t have Kid Fo-Fo anymore, Empire decides to go after Titan and Lucious decides that he and Anika will set up a meeting with Titan’s manager, Brick. Cookie suggests she go, saying Anika is to “bourgie” to handle real street dudes.  Lucious rebuffs her, suggests she meet up with Jamal.

Anika informs Hakeem and Tiana, who fans have dubbed “Takeem” on social media, that they are going to perform on The Teen Choice Awards. Hakeem’s biggest concern is watering down his sound for a teen audience. [I didn’t know he had an audience.] Tiana shoots a text to her new manager, Cookie, who approves.

Lucious and Anika meet with Titan’s manager, Brick, at a spot in the hood.  During their meeting, a drive by shooting occurs causing Lucious to drag Anika down to the ground to prevent her from getting shot.  Anika protests that she can handle the situation but Lucious tells she’s done with street life. 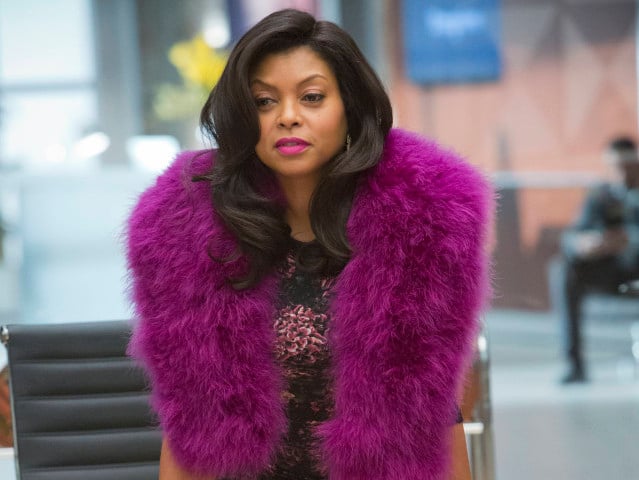 Cookie proves to be the brains of Empire. Rather than meeting with Titan’s manager, Cookie meets with Titan’s mother, Sister Fatima, a devout Muslim with the Nation of Islam. Cookie even comes with her hair covered as a show of respect. Fatima is familiar with Cookie’s story and the mother’s share a bond since both of their son’s are rappers. Fatima confides in Cookie that Titan is the youngest and breadwinner in the family.  She also shared that the man Titan shot had burned down the community center the night before where Titan had recorded his first demos. Cookie offer’s Lucious’ army of lawyers to help Titan and free him from his manager, William Beretti.

Cookie meets with Lucious and informs him that Titan and his mother are with the Nation of Islam. It’s reveals that the Nation of Islam killed Lucious’ father. [Is that an intentional civil rights/Malcolm X parallel?] Because of Titan’s ties to the NOI, Lucious declares he is no longer interested in Titan.

While Cookie and Tiana wait for Hakeem to show up for dinner, Hakeem is at home in the hot tub with his cougar “mama,” Camilla.  Tired of waiting, Tiana barges into his apartment and walks in on them and abruptly walks out. Later, Hakeem arrives to the Teen Choice Awards to be greeted by Tiana, who tells him she’s more concerned that he not blow her opportunity that she’s worked hard for than she is about his fling with Camilla.

At Club Leviticus, William Beretti shows up. The men exchange barbs and reveal that Lucious was signed to Beretti and that Beretti stole the rights to Lucious’ songs. Beretti warns Lucious not to take Empire public or he will reveal the company’s shady origins. Lucious vows to sign Titan to Empire just to get Beretti back.

Lucious visits Titan in jail and offers him freedom from Beretti and $1.7 million.  He passes him a cell phone to record for Empire while he’s in jail.