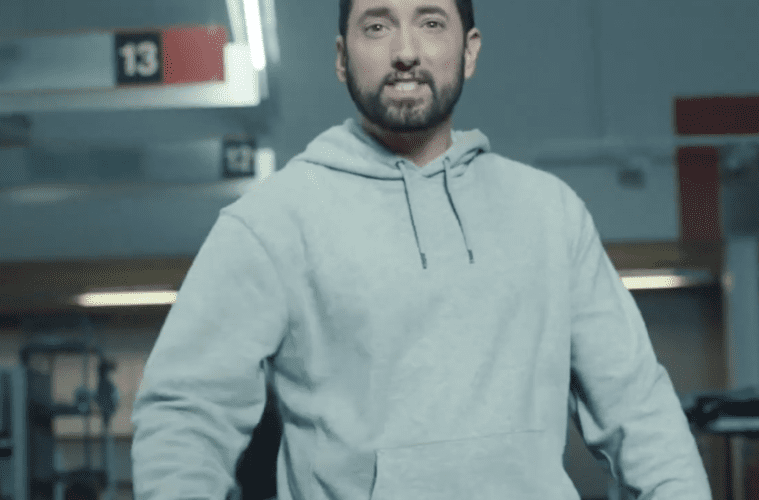 Eminem Invited Michael Jordan To Detroit To Dunk On Him: “I Don’t Think He Knew It Was A Joke”

Grammy-winning rapper Eminem has some stories to tell. This week, he sat down with radio veteran Sway to share a few tales with longtime manager Paul Rosenberg. One of them included a hilarious phone call with NBA icon Michael Jordan, who didn’t seem to like it too much when Slim Shady cracked a joke.

Eminem Gave Air Jordan The Invitation Of A Lifetime

According to Marshall Mathers, he invited MJ to his hometown Detroit so he could dunk on him. However, Jordan didn’t react all too well. Things went quiet after Slim Shady’s remark.

“I don’t know Paul, if you remember this. We were talking about doing some kind of shoe together… Everything was cool, he’s super cool, and everything was good until we get to the end of the phone call and I said, ‘Yo man when are you gonna come to Detroit so I can dunk on you.’ And it was crickets. I don’t remember exactly what he said, but I think he just kinda like, just laughed and I remember getting off the phone going, ‘Oh my God I think I might have just blew it.’ Because to me in my head it was a total joke, right? It’s so ridiculous for me to think that I could dunk on Jordan, right? So in my head, it’s one of those things that you think is gonna be funnier in your head than when you actually say it. So I don’t know what happened after that. It was one of those things that in my head just it would be so ridiculous, he has to know I am joking. But when I got off the phone, I remember thinking, ‘I don’t think he knew I was joking.’ ‘Cause you know, he’s very competitive.”

“Power” actress La La Anthony has been tuned into ESPN’s new “The Last Dance” docu-series on Jordan and his 1997-1998 Chicago Bulls. The high-profile star recently stepped up to co-sign the show. She went to her Instagram page last week to geek out and share her love for MJ.

The Internet takes no time off – ever. Social media has come forward with some hilarious memes inspired by the docu-series two-episode premiere last week. In the first few hours following its showing, the Internet delivered some hard-hitting jokes. Some of the most noticeable memes center on MJ and the team’s former general manager Jerry Krause.

“They were not letting him rest😂” -NBA Memes’ Instagram

Eminem has kept the positivity going. After celebrating over a decade of sobriety earlier this week, Slim Shady has come to the rescue for Detroit hospitals to hand-deliver cups of Mom’s Spaghetti to health care workers. According to reports, he went to Detroit’s Henry Ford Hospital and Detroit Medical Center to drop off the meals. Pics from the great deed have already started to circulate around the Internet.

“Through his Marshall Mathers Foundation, Eminem will be providing cups of Mom’s Spaghetti to healthcare workers around the Detroit area of the next few weeks, according to this camp. If you recall, Mom’s Spaghetti isn’t just a famous namedrop on Eminem’s Oscar-Winning song “Lose Yourself,” but also a staple in the festival circuit with its pop-up spots.” (Billboard)