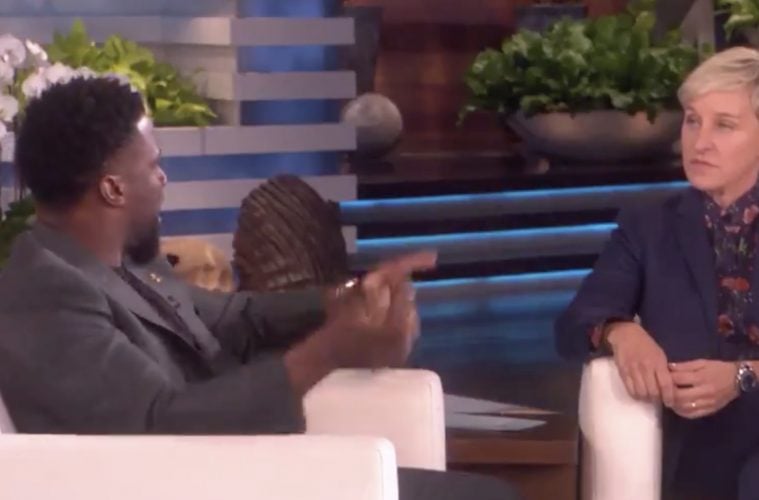 Talk show host Ellen DeGeneres wants to see Kevin Hart host the Academy Awards. The popular TV personality has come to Hart’s defense amid his recent decision not to take over the Oscars over past anti-gay Twitter remarks.

Ellen went to Twitter this week to speak up for Hart following their Q&A on her talk show.

I had an incredible and honest conversation with @KevinHart4real about hosting the #Oscars. It was supposed to air on Monday. I don’t want you to have to wait, so now it’s gonna air tomorrow.

In this conversation, @KevinHart4real was authentic and real, and I’m in his corner. #OscarsNeedHart https://t.co/nhMwSefrMl

Despite the heartfelt words and Kevin addressing the situation on her show, social media hit DeGeneres with backlash.

I feel like if you’re not homophobic anymore, you shouldn’t mind apologizing for your past homophobia again and again and again. I don’t want to hear a hostile retelling of how we didn’t hear your meager apology the first time.

I don’t care how many sitcoms you lost in the 90s.

(1) First, the people who brought up Kevin Hart's past tweets — like me — were not, as Ellen characterized, "haters." The host of the Oscars had made anti-gay jokes, and LGBT people who love the Oscars were legitimately startled to see just how harsh his words were. It wasn't a…

Ellen’s show is basically the embodiment of respectability politics, so using it as a platform to absolve Kevin Hart on our behalf sounds pretty much on brand. Her sitcom allowed her to do something radical, which she suffered for, & she’s been running away from that ever since.

The only thing @KevinHart4real proved by going on Ellen was that he is a terrible actor with zero genuine remorse who didn’t have the decency to address his ignorance. No, they weren’t “haters” who came after you. It was the LGBTQI+ community because we’re sick to shit of it.

I also believe in forgiveness. But I also believe that forgiveness requires an actual apology. Not “I’m sorry people are so sensitive.” Just “I am sorry.” All he had to do. And he indignantly refused because he felt his moment was being tainted. That he was the aggrieved.

this whole ellen/kevin hart thing is a perfect example of how privilege and constant praise distorts a person’s reality so much that they perceive any criticism, however valid, to be an attack on their entire livelihood

In early December, Kevin announced his decision to step down from hosting the Oscars amid the Academy’s demand for him to apologize for his past tweets.

Prior to the tweets, Hart announced he would not step down from hosting the ceremony.

“Guys, I’m almost 40 years old. If you don’t believe that people change, grow, evolve as they get older, I don’t know what to tell you. If you want to hold people in a position where they always have to justify or explain their past, then do you. I’m the wrong guy, man.”

Stop looking for reasons to be negative…Stop searching for reasons to be angry….I swear I wish you guys could see/feel/understand the mental place that I am in. I am truly happy people….there is nothing that you can do to change that…NOTHING. I work hard on a daily basis to spread positivity to all….with that being said. If u want to search my history or past and anger yourselves with what u find that is fine with me. I’m almost 40 years old and I’m in love with the man that I am becoming. You LIVE and YOU LEARN & YOU GROW & YOU MATURE. I live to Love….Please take your negative energy and put it into something constructive. Please….What’s understood should never have to be said. I LOVE EVERYBODY…..ONCE AGAIN EVERYBODY. If you choose to not believe me then that’s on you….Have a beautiful day

I know who I am & so do the people closest to me. #LiveLoveLaugh