Odd Future’s Earl Sweatshirt recently came forward to shell out some frustrations on social media amid his new I Don’t Like Sh*t, I Don’t Go Outside album release.

Sweatshirt resorted to his Twitter page to unload his frustrations.

Listen to the new album on the next page…

A few days ago, Sweatshirt promoted his new album release.

“HEAR MY PAIN,” Sweatshirt posted to Twitter on Sunday night (Mar. 22), along with a link to the new album on iTunes. Last week, the 21-year-old rapper released a video for new track “Grief” with the news of the album, which is markedly shorter than the critically acclaimed Doris. “WHEN YOU GET DONE LISTENING TO IT, LISTEN TO IT AGAIN, THATS WHY ITS 30 MINUTES NUMBNUTS,” he explained on Twitter. (Billboard) 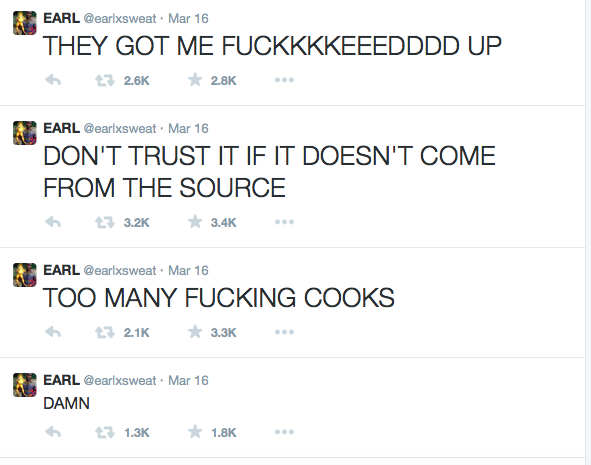 The album comes packed with a few notable collaborations.