OVO Sound leader Drake is keeping busy this week following his monstrous Views album release last month by getting into the studio.

A picture of Drizzy alongside fellow hip-hop star French Montana in a production studio has emerged online.

Drake made history this month with his “One Dance” standout track.

Hip-hop fans spent the past two weeks begrudgingly accepting that Desiigner’s “Panda” was the No. 1 song in the country, but this week, the Future knockoff finally got dethroned by the hero of the North, Drake. Billboard reports today that “One Dance” is the rapper’s first No. 1 song as a lead artist. (SPIN)

The Canadian native’s new Views solo album has sold over one million copies since its April 29 release.

The rapper’s latest release, Views, earned 1.04 million equivalent album units, including 852 thousand copies sold, for the week ending Thursday to top the Billboard 200 chart, according to Nielsen Music figures. Not only is it his best-selling week to date, but it’s also the best-selling week for any artist so far this year. This is Drake’s sixth #1 album in a row, including his 2015 mixtape with Future, What a Time to Be Alive. (ABC News Radio Online)

Heading into the weekend, Drizzy celebrated his new album’s record sales on Instagram. 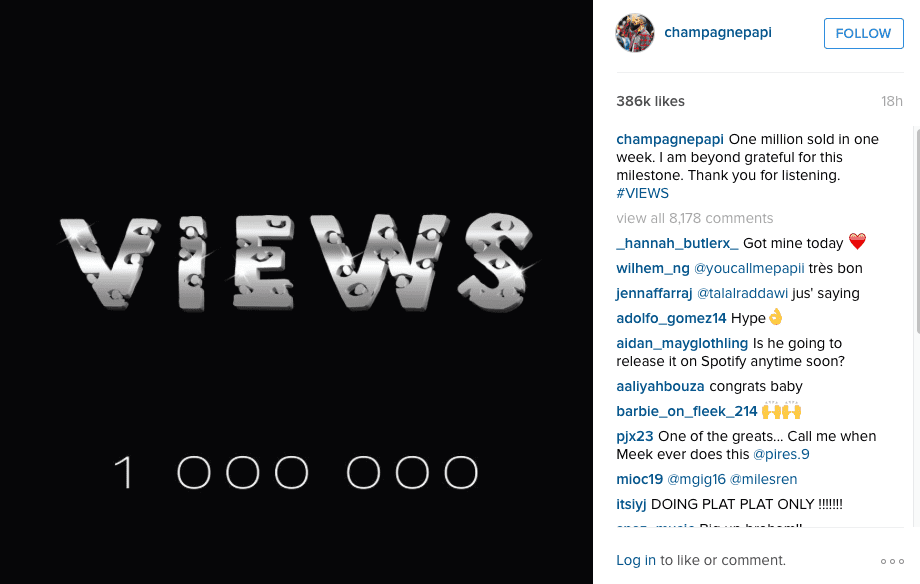