In some now-deleted Twitter posts, Miller denied trying to go at Drizzy on the new anthem. 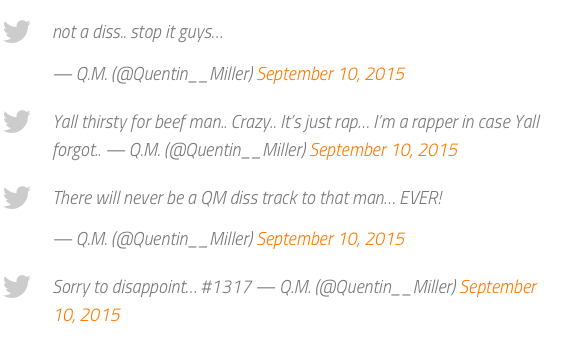 Listen to Quentin Miller’s dicey lyrics on the next page…

On his new “Cease & Desist” song, Miller appears to make subliminal references to his song-writing for Drake.

“Dropped from the label and still wasn’t faded/Gave these n*ggas some of the hottest songs of the year and I’m still underrated,” Miller spits. “No more Mr. Niceguy Quentin Miller/No more love from my side for you n*ggas/Middle fingers all you n*ggas get/Try to run off with my swag I send a cease and desist” (“Cease & Desist”)

“This Pusha verse is actually from the original “Clique,” by Jay Z, Kanye and Big Sean that I produced. It was supposed to be on “Clique,” so this verse is three-years-old, but it’s fucking ridiculous, flawless bars. Jus the flow and the way he’s in the pocket and the attitude about it. I threw the Pusha verse on that motherfucka, then wrote the hook to it and then I did my verse. I felt like “Bussin’ Moves” was just a concept that made sense for how Pusha set it off.” (Genius)

HB also revealed how much of a close-knit relationship he has with Quentin Miller.

“Quentin ended up on “Bussin’ Moves” when I was trying to get the right hook for it. I was in the process of writing the hook, I had him write some stuff and it just ended up working. I’ve known Quentin since 2011, that’s been my homie since then, we’ve always communicated. We’ve been making records for basically this whole year. Way before the Drake shit, we were already connecting. We had already made a bunch of records with his WDNG CRSHRS group and I had made some solo stuff for him and we just been building.” (Genius)

Miller and Pusha exchanged a couple comments to one another following the song’s release earlier this month.