OVO Sound leader Drake is showing no chill on his rumored romance with R&B singer Rihanna by posting up a steamy picture onto Instagram.

Drizzy went to his IG page last night (August 2) and tossed up a jaw-dropping shot of himself behind RiRi. 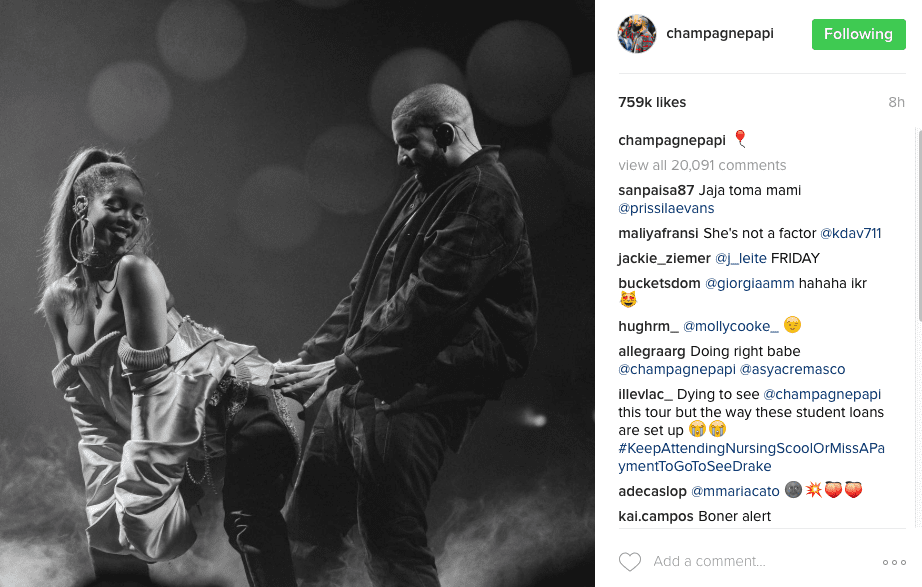 The ‘Views’ rapper, who is currently on his ‘Summer Sixteen’ tour alongside Future, invited his rumoured girlfriend RiRi on stage for a steamy performance of their latest collaboration. “For being here tonight and for anything and everything else, you are way too good to me,” Drizzy told Rihanna in front of the sold-out crowd. (Capital Xtra)

In early July, RiRi and the OVO Sound boss lit up romance rumors after cameras spotted them together in London.

If Rihanna and Drake aren’t banging, then they’re the best friends ever, because they’ve become inseparable. RiRi and Drizzy left Tape club in London Friday night at the same time. It’s the 4th night in a row they’ve been together. (TMZ)

According to reports, the one-time couple caught people’s attention at various nightclubs and even shared a concert stage for four straight days.

Just hours after partying until daybreak on Tuesday night, the duo were spotted together once again, making it difficult for us not to believe they’re more than just friends. On Wednesday morning, they were photographed leaving Tape Nightclub as the sun was rising, and later that day, they reunited on-stage during Rih’s Manchester concert at Emirates Old Trafford, causing the 25,000-plus crowd to go insane as they performed “One Dance” and “Work.” After the performance, the pair headed back into London to party the night away—yes, again! This time they hung out at Tramps nightclub and left one after the other at 4:30 a.m. (E! Online)

One of one @badgalriri