Buzz about the show returning for a third run surfaced across its Instagram page Friday (January 15). 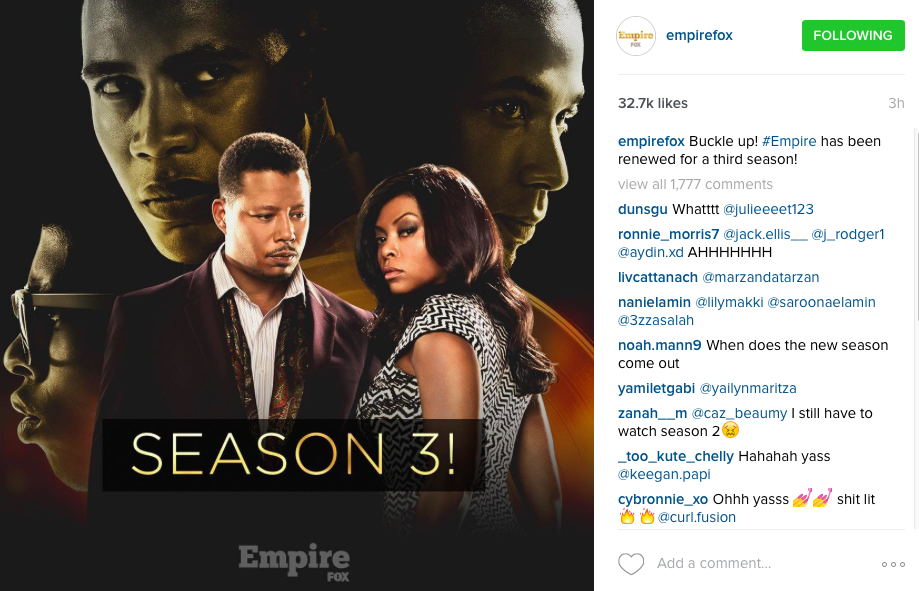 Check out what major award Taraji P. Henson recently won for her acting in “Empire” on the next page…

The star was so overjoyed by the win that she handed out cookies to the audience before taking the stage. (Henson, of course, plays Cookie Lyons on the Fox hit.) But it didn’t end there. Henson snapped at the man who helped her up the stairs because he stepped on the long train of her Stella McCartney dress, and yelled at the teleprompter for telling her to wrap up her speech. (Us Magazine)

During her acceptance speech, Taraji made sure to thank “Cookie” for her realness.

“Cookies for everyone tonight — my treat,” the actress began after passing out the sweets to Leonardo DiCaprio and Lady Gaga (among others). “Hollywood Foreign Press, thank you. I mean, who knew that playing an ex convict would take me all around the globe. It just goes to show — I thought it would be Queenie, Will, my character from Karate Kid — but it’s Cookie, who spent 17 years in jail for selling crack. So the world loves real, thank you. So many people to thank. My manager… my publicist…” (Golden Globes 2016)

Cookie Lyon Named TIME's 'Most Influential Fictional Character' Of 2015 -blogged by @avah_taylor – #Empire's #CookieLyon, played by actress #TarajiPHenson, has been named the "Most Influential Fictional Character" of 2015 by #TimeMagazine. Explaining why Cookie snatched the top spot, TIME says "Cookie Lyon, with her high-drama scheming and higher-drama wardrobe, the Lyon family matriarch (played by Taraji P. Henson) was the biggest draw on TV’s most popular new show, Empire, luring more than 13 million viewers a week. In addition to spawning countless memes and catchphrases, she also helped inspire a clothing line at Saks Fifth Avenue. As Cookie herself said, 'That’s my name. Take a bite.' " She is also the only Black character on the list of 16. Universal's #Minions was the runner up for bringing in more than $1.10 billion worldwide, making it the second highest-grossing animated film of all time. Season 3 of Empire airs on FOX in March.