Donald Trump’s Mad AF About Hillary Clinton’s Shade: “Where Are Your 33,000 Emails You Deleted?”

Trump relied on his Twitter Thursday (June 9) to lash back at Clinton. 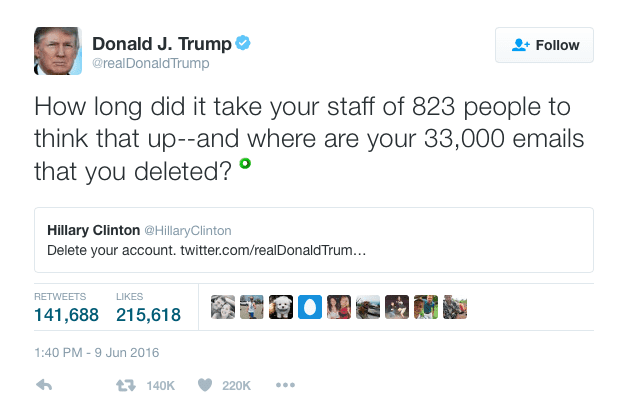 Clinton hopped on Twitter hours prior and went right at Donald’s neck. 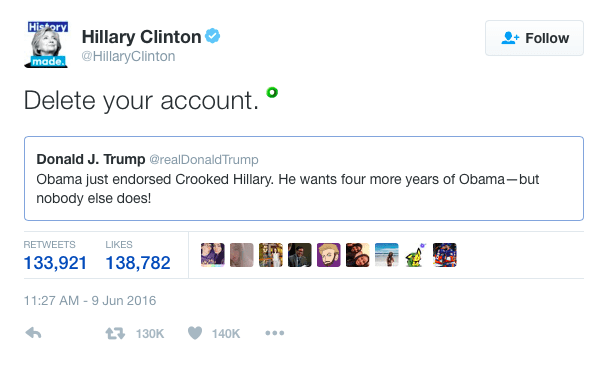 "I’m with her, I’m fired up, and I can’t wait to get out there and campaign for Hillary." —@POTUS pic.twitter.com/ptbhfpCooQ

Honored to have you with me, President Obama. I'm fired up and ready to go! -H

Bernie Sanders, after an hour-long meeting with president Obama, said he is determined to work with Hillary Clinton to defeat Donald Trump. On the steps of the White House and facing a sea of reporters, it was a prime opportunity for the flailing democrat to deliver the staple diet of his campaign rhetoric, including the “struggle“ of ordinary Americans to put food on the table, child poverty, low life expectancies, college debt, crumbling infrastructure and the power of Wall Street. (Independent)

“I think he’s the donkey of the decade. He does scare me. Because what he’s saying that he would is wrong for our country. It’s not only offensive to people, it’s dangerous. He’s setting people against each other. He’s inciting violence.” (“The Breakfast Club”)