“That was something from Instagram. I didn’t even know about that,” Diddy said referring to Meek using Diddy’s vocals on his “Wanna Know” diss song. “When I was listening to the diss record I was like, ‘Where did I hear that from?’ Nah, he didn’t ask me. But you know, he probably felt he had permission because we rock with each other so it’s all good. [He] got it off Instagram, he was inspired by it, but I’m not in the middle of that. Eh yo Drake, please don’t do no ‘Back 2 Back 2 Back.’ It wasn’t me! I see you 6 God! [laughs]” (“The Breakfast Club”)

Watch Diddy’s full interview on the next page…

In a now-deleted social media post, Meek Milly recently came clean on wanting to move away from the feud. 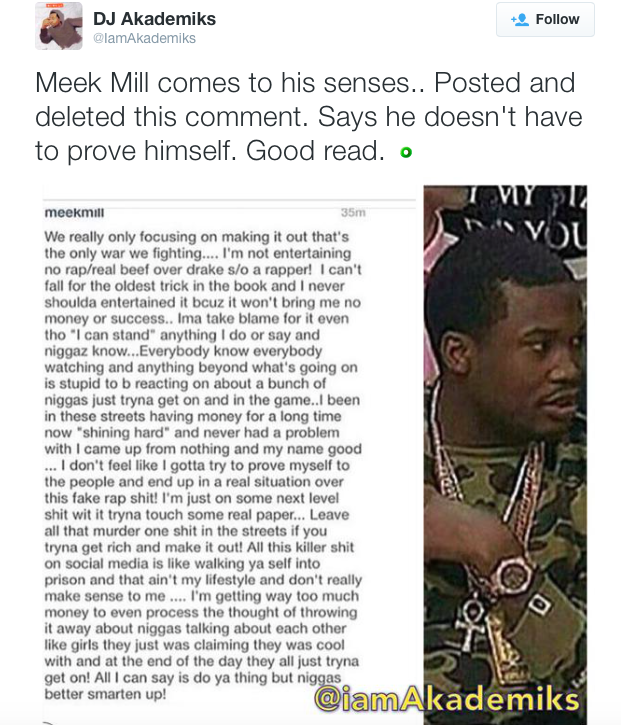 According to recent reports, Meek’s “Wanna Know” track is no longer on his Dreamchasers company Soundcloud account.

The song, “Wanna Know,” was uploaded to the Dreamchasers Records SoundCloud page and had racked up millions of streams before being abruptly taken down in the past 24 hours. But this doesn’t necessarily mean Meek is surrendering to Drake. The removal of the song was likely done to avoid a potential lawsuit from The Undertaker over the wrestler’s famous ring entrance song. (Rap-Up)