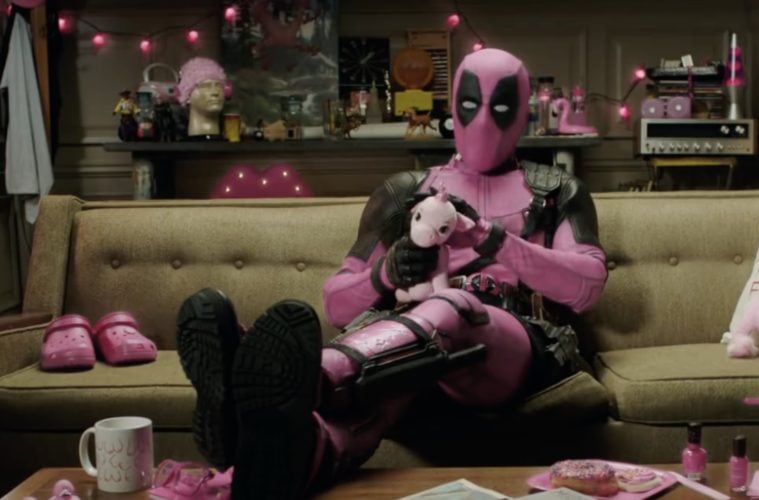 Working Wednesday. We’re putting in that work SOHH why not get things going with a little message from Deadpool for anyone fighting cancer? Speaking of seriousness, how about paying a little homage to some New York City firefighters at an amazing Big Apple exhibit? With respect on your mind, how about giving some to T.I. honoring the life of Martin Luther King Jr.? All this coming up in SOHH Whatcha Think.

Deadpool is taking on the biggest villain of all time – cancer. Everyone’s favorite on-screen shooter has delivered a must-watch new clip offering up a pink suit to cancer? 20th Century Fox is on it:

20th Century Fox and DEADPOOL have announced a new epic partnership with the fundraising platform Omaze in support of F*ck Cancer!

Announced during last night’s FX premiere of the original DEADPOOL, the partnership provides fans the chance to receive an exclusive, custom-made pink Deadpool suit. A cause close to the Merc’s heart, proceeds will benefit the work of Fuck Cancer, the nonprofit dedicated to cancer prevention, early detection and providing support to those affected.

Check out Deadpool in the video below as he shares this one of a kind campaign with fans, who can enter to win for just $10!

Are you going to help this movement? What would you do if you won the suit? Is Deadpool the funniest hero in the superhero world? #SOHHWhatchaThink?

New York is easily one if not the biggest and best city in the world SOHH it only makes sense to honor the men and women who have protected Gotham City in light of events like 9/11. Last night, SOHH had the chance to cover an epic “Everyday Heroes” exhibit by Alexander Millar. Peep below for SOHH correspondent Jacob Mercado’s pics and info on what went down:

New York’s firefighters are renowned across the world for their valor, dedication and sacrifice. Now, they have inspired the acclaimed UK artist Alexander Millar to create a new body of work that honors the city’s ‘Bravest’ and celebrates the qualities that make them some of the most extraordinary working people on the planet.

Taking inspiration from archive material from the New York City Fire Museum, and the Vulcan Society (a fraternal organization of Black Firefighters), including photographs of the 18th, 19th and 20th century firefighter, Millar has created a collection of portraits and cityscapes that show respect, humor and warmth for the everyday heroes of the city, communicating a strong sense of the people behind the uniforms.

Millar launched his new collection, Everyday Heroes • NYC, at the New York City Fire Museum on April 3rd. special guests where able to view original artwork in oil and pencil, all of which have been created especially for the museum in Millar’s trademark contemporary impressionist style.

After a short run at the museum, the show will transfer to the Millar Fine Art Pop-Up Gallery, in Soho, New York for an expanded exhibition which will bring together critically-acclaimed work from recent years, alongside his new collection inspired by New York and its working people, from the fire department and beyond.

20% of the profits from sales of one of his new artworks, ‘We Can Be Heroes’, to the city’s Fire Museum and the Vulcan Society.

Are you a fan of pop-ups? Would you put Alexander Millar’s artwork in your crib? What’s the best museum in the Big Apple? #SOHHWhatchaThink?

It’s hard to believe how much better and different things may be in 2018 if Martin Luther King Jr. didn’t have his life taken away from him 50 years ago today. Various hip-hop artists have paid their respects to MLK but none more than Black Lives Matter activist and civil rights supporter T.I. His IG has the salutes:

Today the Braves and I join the City of Atlanta and the World in honoring the life and legacy of Dr. Martin Luther King, Jr. on the 50th Anniversary of his assassination. #mlk50forward

My eyes have seen the glory…. Still there’s so much further to go…. 50yrs since Dr.King passed on to his next mission & still so much of his dream has yet to be fulfilled. But thanks to him & his many sacrifices we’ve come a long way. Rest in Power Dr.King!!! Thank You and Your Family for going hard for all of US!!!

#MLK50: I’m featured in an @11Alive special report as we remember the life and legacy of Dr. King on the 50th anniversary of his assassination. The one-hour comprehensive coverage brings you interviews from his family, civil rights leaders congressman John Lewis & ambassador Andy Young, the legendary Hank Aaron, and my sit-down interview with reporter @neimerdreamer. MLK’s closest associates remember what that day was like. His children recall what life has been without their father. And the city of Atlanta reflects on how he changed the city & nation. This is a tease of “Remembering The Dream", a special report that airs this Wednesday at 7 p.m on @11alive news. @repjohnlewis @andrewyoungfoundation @broyal12, @braves

Have you paid your respect to MLK Jr.? How much better could things be today if he didn’t get assassinated? How far have we come? #SOHHWhatchaThink?