Previous Next
Up Next
https://www.yahoo.com/entertainment/dave-chappelle-slams-george-floyd-132400919.html
4.5k Views Comments Off on Dave Chappelle Returns W/ Explosive Free Netflix Special 8:46 Unloading On George Floyd’s Killers: “This Is The Streets Talking For Themselves”
Share

Comedian Dave Chappelle is back at it and with a purpose. The Hollywood entertainer has released a surprise Netflix comedy special taking direct aim at the police officers responsible for killing black man George Floyd.

The unexpected special from Dave Chappelle arrived Friday and is titled “8:46” which is a direct reference to how long arrested ex-cop Derek Chauvin had his knee on Floyd’s neck before killing him. The emotional show is currently streaming on the streaming giant’s YouTube channel.

The comedian performed the special on June 6 in Yellow Springs, Ohio, for a socially-distanced audience that all wore masks in an outdoor concert setup. Chappelle noted during the set, “This is like the first concert in North America since all this shit happened, so like it or not, it’s history. It’s going to be in the books.” Given its title, much of Chappelle’s “8:46″ special centers around the death of George Floyd and the international protests that have taken place as a result. The comedian praised protestors for standing up against police brutality but added, “It’s hard to figure out what to say about George Floyd, so I’m not going to say it yet.” (Yahoo! Entertainment)

In the special, Chappelle directly references watching the footage of Floyd’s murder. He also didn’t hold back on exploding on the Minneapolis cops all connected to George’s killing.

“This kid thought he was going to die, he knew he was going to die. He called for his mother, he called for his dead mother. I’ve only seen that once before in my life: My father on his deathbed called for his grandmother. When I watched that tape I understood this man knew he was going to die. People watched it, people filmed it, and for some reason that I still don’t understand, all these f*cking police had their hands in their pockets. Who are you talking to? What are you signifying? That you can kneel on a man’s neck for 8 minutes and 46 seconds and feel like you wouldn’t get the wrath of God? That is what is happening right now. It’s not for a single cop, it’s for all of it, f*cking all of it. I don’t mean to get heavy but we gotta say something.” (“8:46”)

Dave took things a little deeper by going at a few notable black celebrities. Chappelle targeted both CNN’s Don Lemon for singling out entertainers for not immediately speaking out on Floyd’s death and conservative personality Candace Owens for trying to single out George’s past.

“This is the streets talking for themselves, they don’t need me right now. I kept my mouth shut. And I’lll keep my mouth shut. Don’t think my silence is complicit. Why would anyone care what their favorite comedian thinks after they saw a police officer kneel on a man’s neck for 8 minutes and 46 seconds? I can’t get that number out of my head. … I don’t give a f*ck what this n*gga did. I don’t care what this n*gga did. I don’t care if he personally kicked Candace Owens in her stanky p*ssy. I don’t know if it stanks, but I imagine it does. If I ever find out, I’ll let you know for sure. I’ll tell like Azealia Banks. I’ll tell.” (“8:46”)

Chappelle even commented on the quality and rollout of his new special. There’s a message on video’s YouTube page from Dave about the urgency in putting out the visual without major editing.

From Dave: Normally I wouldn’t show you something so unrefined, I hope you understand. (YouTube)

Comments Off on Dave Chappelle Returns W/ Explosive Free Netflix Special 8:46 Unloading On George Floyd’s Killers: “This Is The Streets Talking For Themselves” 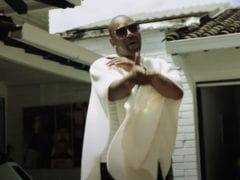