Dame Dash On Will Smith No-Show: “Let’s Say Will Smith Didn’t Have A Movie Out, Would He Still Boycott? [Video]

Music mogul Damon “Dame” Dash has shared his thoughts on Hollywood icon Will Smith announcing his plans to stick by wife Jada Pinkett‘s side by not appearing at next month’s Academy Awards.

In Dash’s opinion, Smith being snubbed for an Oscar nod makes it hard to see if his no-show intent is genuine.

“Let’s say Will Smith didn’t have an Oscar or a movie out, would he still boycott?” Dash says. “I don’t have a movie in there. I’ve had movies that I felt should have been nominated, like The Woodsman and Shadowboxer. I felt dubbed. Right now, it’s kind of hard to hear somebody say, ‘Yo, I’m not going to the Oscars ’cause I wasn’t invited’ and expect everyone else not to. What about everyone that’s not invited all the time? So I would rather hear Will say that when he didn’t have a movie out or Jada [Pinkett Smith]. It would seem a little more objective as opposed to personal.” (“Dr. Boyce Watkins”)

Watch Dame Dash’s interview on the next page…

Smith issued a statement this week about sticking by Jada’s side.

“She’s deeply passionate and when she is moved, she has to go,” he said. “And I heard her words and I was knocked over, I was happy to be married to that woman but I appreciated the push. There’s a position that we hold in this community and if we’re not a part of the solution we’re part of the problem,” he continued. “And it was her call to action for herself and for me and for our family to be a part of the solution. I think that diversity is the American superpower – I think that I have to protect and fight for the ideals that make our country and make our Hollywood community great.” (USA Today)

Music icon Quincy Jones has also revealed the possibility of not attending the ceremony over the lack of diversity in its nominees.

The legendary producer is the first African American on the Academy’s board of governors and on Wednesday he told reporters, “We’ve got to find a solution. It’s been going on for too long.” Quincy said he planned to ask for 5 minutes in front of the board to discuss the hottest topic in Hollywood, and if they don’t give him the time … he says he’ll refuse to present at the Oscars. He’s supposed to present an award with Common and Pharrell Williams. (TMZ) 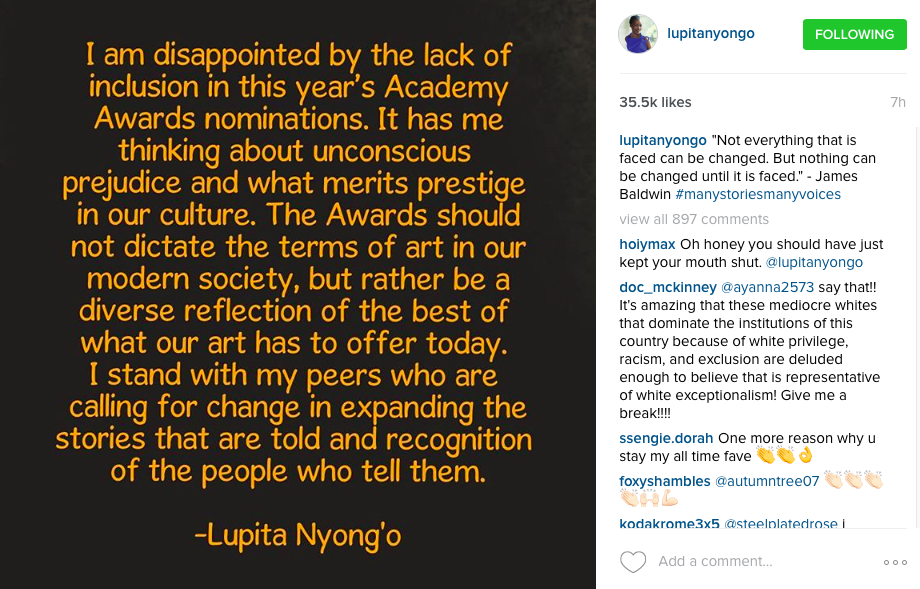