Sign Up Now For The Replay
Subscribe to our
Newsletter
►
Menu
Search
Menu
1.7k Views Comments Off on D4L’s Fabo On Shawty Lo’s Unreleased Stash: “We Got A Lot Of Music Together”
Share

Former D4L member Fabo has paid homage to the memory of late group founder Shawty Lo. The hip-hop artist discussed his passing and revealed there is unreleased music to possibly come this week.

In a new interview, Fabo revealed his reaction to learning about Lo’s death.

“I was just getting up and my mom called me, then I got on social media and I looked at one of the radio personalities [say it] and I knew it was forreal. It’s a sad day, man.” (Complex)

“I was on him about a song that we did. You know, we just gotta cherish every moment with people and I just remember him texting me back saying “I love you, cuz” and then sending the song, so that was crazy. We collabed with a lot of music, you know. Shawty stayed connected and stayed working with each other but you know we got a lot of music together.” (Complex)

Shawty’s dad died Sept. 6 of a sudden heart attack, and the rapper canceled live gigs while he was grieving — but he intended to return to the stage this Thursday in Baltimore at Club Oxygen with Hot Boy Turk. Shawty’s manager, Johnnie Cabbell, says Shawty was going to perform the new track he wrote for his dad, called “Letter To My Father” … aka ‘L2MF.’ As we reported, Shawty died early Wednesday morning when his car hit 2 trees in Atlanta. The manager says the tribute show is still on, but now it’s dedicated to Shawty instead and Beanie Sigel will be onstage too. (TMZ)

Lo’s one-time rap foe T.I. reflected on his life Wednesday (September 21) and dished on how much he respected him. 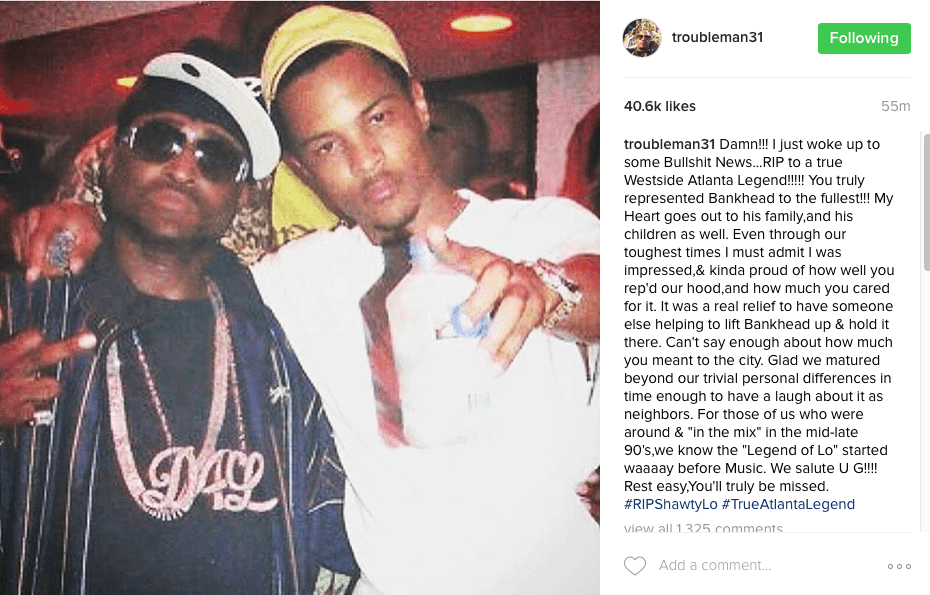 Comments Off on D4L’s Fabo On Shawty Lo’s Unreleased Stash: “We Got A Lot Of Music Together”