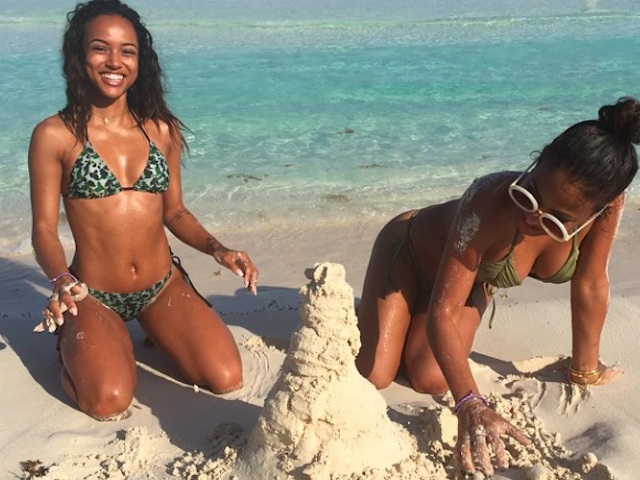 Young Money’s Christina Milian has put an immediate stop to rumors and speculation about hooking up with longtime friend Karrueche Tran.

Despite the speculation, Milian denied ever locking lips with the popular model.

Milian is set to appear on this weeks “Allegedly” podcast with Matt Weiss and Theo Von where she talks about her history with women. Christina also talks about an incident from a couple weeks back where pics made it look like she and Karrueche locked lips … saying it just didn’t happen. (TMZ)

Listen to Christina Milian’s interview on the next page…

The dating rumor came from pictures of Milian and Tran appearing coupled up surfacing online.

Christina and Lizzy Milian are at Christina’s house when they hear a knock at the door. When Christina answers it, she’s surprised with a huge bouquet of flowers and a note that says “just bekuz.” “Well I wanted an apology and I guess I got a token,” Christina says. “I mean this is definitely an extension, what is it called? He’s extended an olive branch. He’s giving me a sign of hope.” “I’m feeling like a new woman,” Christina says. “Wayne and I are back together and so I figured it’s time to get a new look from top to bottom.” (E! Online)

This past Thanksgiving, Milian appeared to send a warning shot to Wayne following their recent breakup on Twitter.