Grammys Tuesday. It was all about the Grammys last night (February 15) SOHH why not get things started with Chris Brown‘s prediction about the showcase coming true? Speaking of the awards show, did the Grammys respond to Kanye West? Ice Cube came through to announce “Best Rap Album” but did he really leave with the quickness? All this coming up in SOHH Whatcha Think.


Did you stay up for the entire Grammy Awards last night? No one will blame you if you did not, Chris Brown had a feeling or two about how it would turn out. Chris Brown’s Instagram page is on it:

How boring y'all think the Grammys gone be this year?

There were a lot of big moments, but does Chris Brown have a point? Did the commercials and gaps in awards presentations mess things up for you? Did Rihanna not performing change the overall vibe? #SOHHWhatchaThink?


Have you noticed the power of social media in 2016? We’ve always known companies had Facebook pages and Twitter accounts, but it seems more than ever they have some people behind them really giving out some crazy shade. Did the Grammys really try to shade the homie Kanye on Twitter? The Grammys Twitter page is on it: 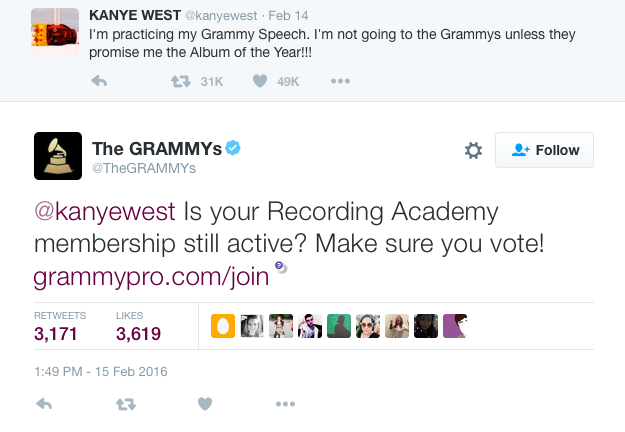 Could you really call that shade? Any chance they were just trying to keep it 100? Is social media winning right now? #SOHHWhatchaThink?


There was nothing better last night (February 15) than Kendrick Lamar receiving the award for “Best Rap Album” at the start of the Grammys. But did the big presentation from Ice Cube and his son prove more than enough for the former N.W.A. member? Twitter is on it:

You gotta love that! Anyone else more impressed at Ice Cube lighting up after the awards show? Should he have stayed around for Kendrick Lamar’s performance? #SOHHWhatchaThink?