Chicago’s Chief Keef can’t get politics out of his mind. A few days after teasing fans about a presidential run Sosa has struck again. 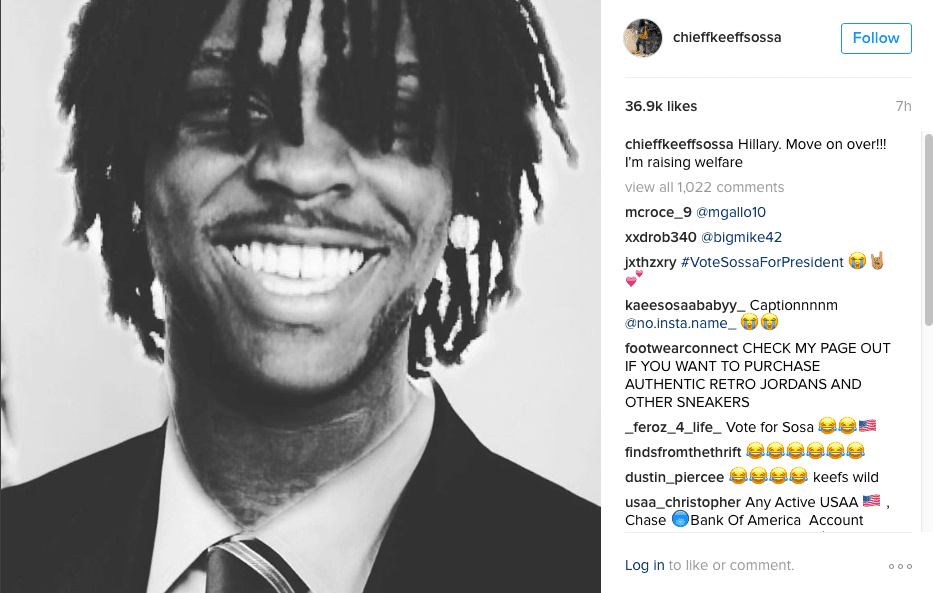 “When I look at the election right now and all the bullsh*t that’s going on, you can’t help but laugh. You got Donald Trump – and I tell n*ggas, that n*gga’s cold. If he was a rapper right now, he’d be 2Pac. If you put that album out right now, it’d be diamond. He hot. … You can be a businessman, that means none of your employees gotta like you. By the way, if your business is successful, nine times out of ten your employees aren’t going to like you – I ain’t gonna knock the man and say he’s not a good businessman, but he’s not f*cking presidential material. He doesn’t have or practice the same morals that people have when they’re in those positions of power. Even if they gave him a play where he could help the deficit – but you’re talking about commander-in-chief?” (Tax Season)

“Everybody seems to be saying, ‘Stay at home, don’t vote because we have two that are both boof as f–k.’ But we have one that’s more boof. So I want to encourage everyone to vote so that we don’t end up with a guy that says he’s going to f—ing ban f*cking Mexicans for coming out here and build a wall and make them pay for it. Like come on, man. Would you rather have a president hiding their emails and, um, lying about other things. Or, uh, a f—ing racist? I think it’s an easy call even though both of them are f—ing boof like I said. [Hillary’s campaign] is not paying me to say this.” (Billboard)