Chief Keef Says He’s Going To Put On For His City: “I’m Running For Mayor”

Chicago rapper Chief Keef loves his city so much he’s announced plans to run for mayor in Chi-Town. 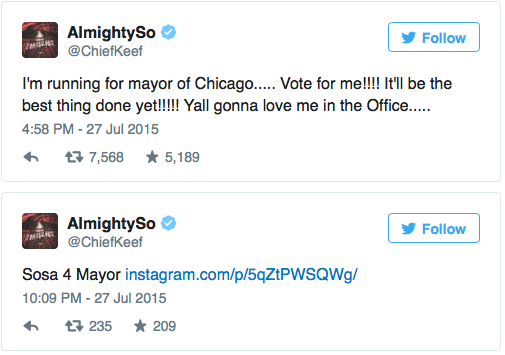 Hammond police Cmdr. Pat Vicari said the promoters were warned the concert would be shut down if Chief Keef performed. “We spoke to the promoter several times, and they assured us (Chief Keef) would not be performing,” Vicari said. “Later, an officer working the show realized it was being streamed on one of the hip-hop sites, and promoters were warned again they would be shut down.” (The Washington Post)

Buzz about Keef having a secret show go down following a previous ban bubbled online a few days ago.

“Banned by the Mayor of Chicago. Chief Keef, from a secret Chicago location, live via hologram, collecting for charity. Stop the violence now.” (Chief Keef’s Instagram)

Keef’s music “promotes violence” and poses “a significant public safety risk,” Emanuel’s office said Saturday. The rapper couldn’t even attend the show in person, instead opting to perform via hologram, because of outstanding warrants for his arrest. (NY Daily News)