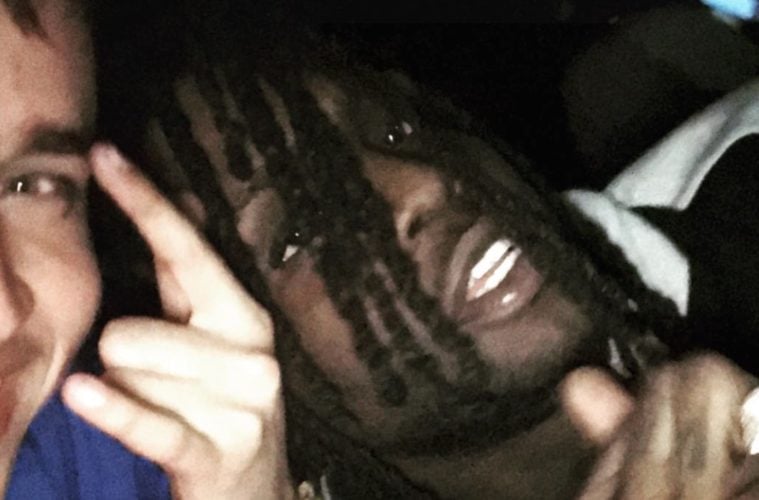 Chief Keef Photoshops Himself W/ MLK: “Last Time I Was Locked Up Donald Sent Secret Service After Me!”

Chicago rapper Chief Keef is out here looking more than just woke. The hip-hop artist has paid the most respect to Martin Luther King Jr. and fired a direct shot at President Donald Trump at the same time.

Keef went to Instagram last night (January 15) with a Photoshopped pic of himself alongside the late civil rights leader.

Last time I was locked up Donald sent secret service after me!

As we celebrate let us remember exactly why Dr.King isn’t here to celebrate his own birthday…. Because we live in a country that would rather hate you & kill you,just to celebrate you, than actually accept the change you represent & unite with you. Happy MLK Day✊🏽🙏🏽👑

A perspective we’ve rarely heard from Dr.King. He seemed to have had an epiphany of sorts right before his untimely assassination. These words resonate still today just as much as they did then. Today we celebrate The Great Dr.Martin Luther King JR. by acknowledging his sacrifices,studying his philosophies, & living out HIS dream of complete freedom economic balance & equality in America. Happy King Day!!!👑

Alice Johnson a worker class white woman from north Chicago who was my Mentor, Friend and Loved one was the 1st person to have me read this. She was the person that made sure I understood King was a Radical and not just a “Negro” leader of days past. She told us never believe the PC version but rather study the Radical King. He was anti war, pro people and about the right now! *******************************************She helped me and other kids become organizers and leaders. She made sure I knew I was here to serve my community by being an advocate, activist and organizer. *******************************************I miss u, Al. I miss Rev. #JamesOrange Too. He was a teen when he met King. He joined and organized with the SCLC in Selma and thru out the south. Even after the US Govt helped too Assassinate his beloved friend and leader, He remained a NON VIOLENT organizer until his death. He worked on freeing and welcoming home Mandela. He organized for workers rights locally and internationally. He was a big black man with broad shoulders and strong and a bull and I never saw him raise his fist in anger or violent emotion. He called every child he helped build into an organizer “Leader”. He told me he loved me and wud always not like my name being “Killer”. He was my hero. Alice was my (S)hero. These people both Black and White were products of Kingian Non-violence and showed me how truly radical love is the only way this works. No time for moderate love or thinking. No time for moderate change. Remain a radical. Always. #HappyMLKDay

The same Govt that rules us, killed her husband. She lobbied and won this day in his honor vs one of the most racist and evil men to serve as POTUS my opinion. I reference that in regards to his treatment of those of my class and race. I celebrate MLK day with love and respect! I celebrate Mrs. King, as well. Ain’t Martin without Coretta. I thank her and his children for sharing him with us. Happy MLK day, Leaders! #RemainRadical #haveARadicalLove

We will all not agree. We will all not “get along”. We all not share the same philosophies and strategy for accomplishing freedom but we all are working for our people and all people ultimately. There are many roads to freedom so even if we shud disagree on the proper path, I love u brother and sister and I will see ya When we get there. These two “Georgia Boys” helped shape me and my thinking of what is possible for the black diaspora. One a Muslim And devout separatist and the other a faithful Christian and integrationist both loved Freedom, Justice and sought out Equality for black people and all people. Love and Respect as I Remember all who sacrificed for my freedom and yours. ASA and God’s Peace Be With.

In order to be a hero u have to be willing to be called a Villain. Thank U MLK Jr. Thank all those who were and are arrested in the pursuit of liberty and justice for ALL. To those in the struggle and working hard to obtain freedom for us all. We say thank u. We support u. Support political prisoners. It’s our duty to support them as they have given their lives up to support our rights and privileges. Happy MLK day. 🤜🏾🤛🏽 stay radical! Be a revolutionary! Always