Chance The Rapper Says “Empire” Is Outta This World: “You Know That’s Not How The Rap World Works”

Chicago rapper Chance The Rapper recently talked about the buzzing “Empire” series and dished on just how realistic of a portrayal it is for how the rap industry works.

“I’m probably going to do some comedy shows at my new sets. I can be very funny. I actually went out for a role in Empire. I wasn’t trying to be on the show at all, but me going out for a role on Empire is something me and my friends would find humorous. … Yeah. In real life I am. I have to clear it out that in real life I didn’t actually go out for Empire. I just thought it would be funny if I said something like that. … You know that’s not really how the rap world works, right? Terrence Howard, his conference room has a basketball court in it. Would you audition for a role on Empire?” (Interview Magazine)

Check out these huge “Empire”-related stats on the next page…

According to reports this week, the mega prime time series has grown since debuting earlier this winter.

Of the 11.4 million of overall viewers, its core viewership of fans is 67 percent Black — the highest ever recorded for any prime time series. Move over Olivia and Annalise, Taraji P. Henson’s Cookie is the new queen of prime time. (Target Market News) 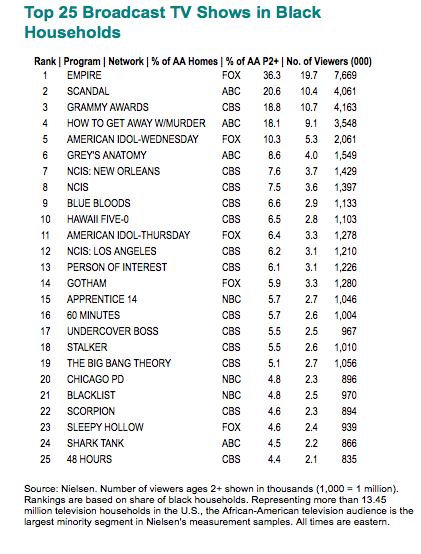 Over the past year, hip-hop-themed shows “Empire” and “Power” have reaped a lot of early success.

Fox has hit a much-needed ratings paydirt with Lee Daniels and Danny Strong’s Empire, already renewed for a second season; and Starz has done the same with its 50 Cent-produced entry Power. Not to be outdone, Viacom-owned cabler VH1 is also readying The Breaks, a drama series based on Dan Charnas’ best-selling book The Big Payback: The History of the Business of Hip-Hop, which is wildly considered one of the most comprehensive accounts of the history and business of hip-hop. (The Hollywood Reporter)

Recent reports revealed “Empire” was one of three Fox series that would live to see another season.

Fox just announced three early series renewals — and one is really early. As expected, the network has picked up Gotham for a second season and Brooklyn Nine-Nine for a third season. But far less expected (at least this soon) is that Fox has renewed hip-hop drama Empire for a second season. (Entertainment Weekly)