Chicago’s Chance The Rapper knows Kanye West‘s music. The hip-hop superstar has ranked every single one of Yeezus’ albums.

Chance went to Twitter Thursday (January 5) with each album from College Dropout to 2016′ The Life Of Pablo ranked. 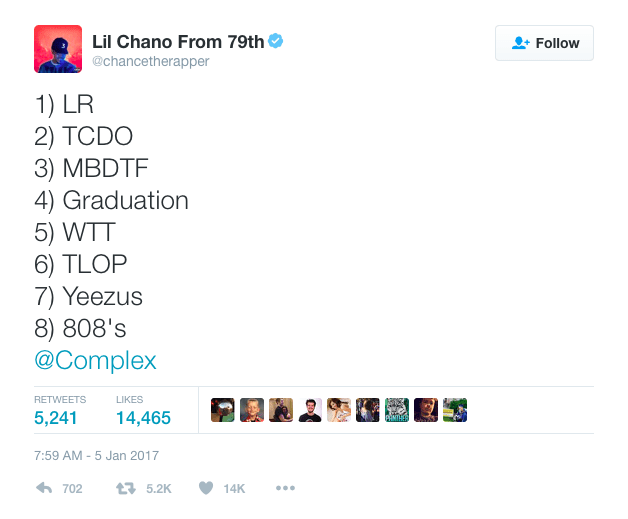 “It’s not easy at all, definitely not telling Kanye [West],” Chance said referring to the opportunity to possibly sign with Yeezy. “It’s definitely hard keeping that resistance, but I want to teach people that it’s doable without. … I wanted to give the idea of freedom back to artists and one of the biggest things is control of how you release your music. So, streaming and free releases—I figured that’d be a good beacon to have people at least pick up on what i was doing as an independent artist.” (ABC)

Chance hopped on Instagram Monday (January 2) and hinted at something possibly brewing with Childish Gambino. Last fall, Chance credited Gambino for putting him up on some entertainment biz game.