Chicago’s Chance The Rapper has shared his thoughts on President Barack Obama‘s leadership and what job is suited for him after his presidency ends this year.

In Chance’s perspective, President Obama is primed to help run his Chi-Town hometown.

A Chicago native and 2013 Complex cover star, Chance emphasized that his city needs a new mayor and that Obama could be the right person for the job: “He makes a lot of great, non-partisan decisions and he’s obviously spent a lot of time in Chicago on the South Side.” (Complex)

This week, Chance spoke out amid hospitalization reports going viral. 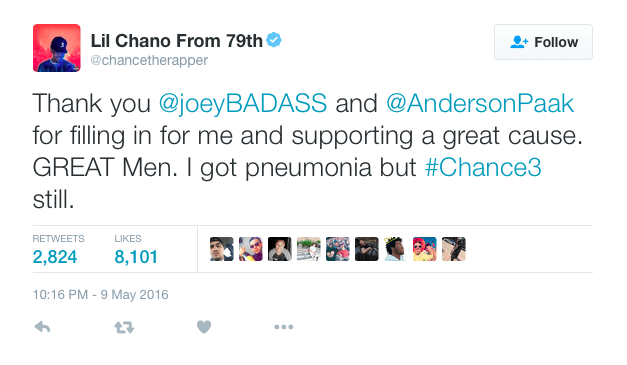 Chance The Rapper won’t be taking the stage as scheduled for a charity event Monday night (May 9) after being hospitalized, a source tells Billboard. The Chicago rapper was slated to perform at New York’s Terminal 5 for the “Night For NYC” event tonight, hosted by the Robin Hood organization to raise money in the fight against poverty. According to the event’s site, general admission for one costs $150 while deluxe admission runs at $250; 100 percent of every dollar would help “feed a family of four for one week.” (Billboard)

New York native Joey Bada$$ came through in the clutch to cover for Chance.