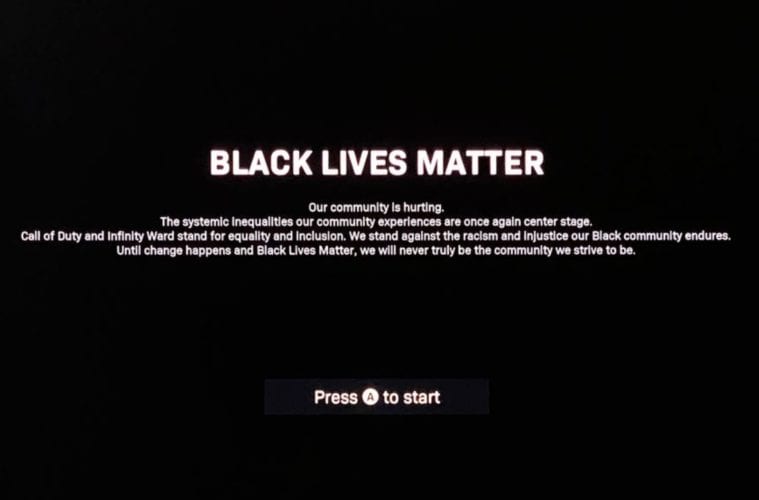 Activision’s Call of Duty knows the importance of Black Lives Matter. The huge gaming franchise has added a new Call of Duty: Modern Warfare in-game message to show its support for the protests happening around the world.

As of Friday morning, gamers will now be greeted with a message when they load up the video game. It also reportedly appears when switching to separate in-game modes.

Infinity Ward just released an update for Call of Duty: Modern Warfare that adds a splash screen message in support of the Black Lives Matter movement. Players are being told they need to update their client upon finishing multiplayer games, and once they do, the message appears on screen. “Our community is hurting,” the statement reads. “The systemic inequalities our community experiences are once again center stage. Call of Duty and Infinity Ward stand for equality and inclusion. We stand against the racism and injustice our Black community endures. Until change happens and Black Lives Matter, we will never truly be the community we strive to be.” (The Verge)

On Thursday, another huge video game franchise showed its support for Black Lives Matter and the life of slain black man George Floyd. Powerhouse company Rockstar’s biggest titles temporarily shut down in Floyd’s memory. The statement showed the company’s commitment to supporting Black Lives Matter around the globe and especially in the United States.

“It would be inadequate if you did not regard the life and love and celebration the family wants,” Sharpton said. “But it would also be inadequate … if you acted as though we’re at a funeral that happened under natural circumstances. … The family is not independent of the community,” he said. “The family wants to see something happen.” (Mass Live)