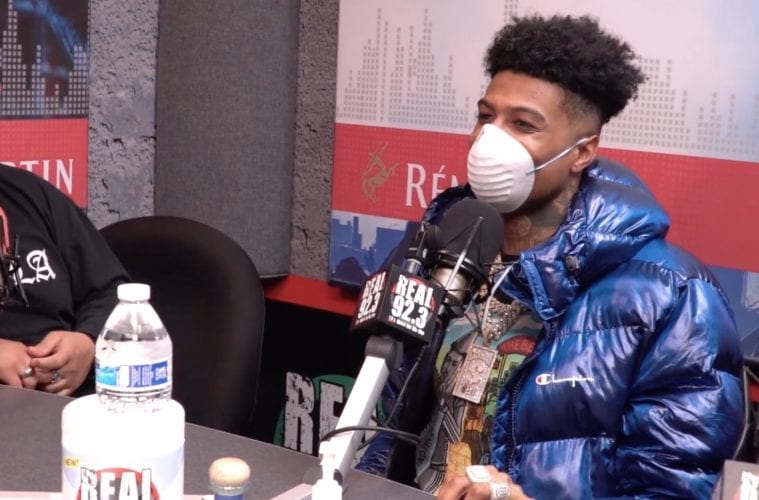 Blueface Says He’s Down To Smash Lizzo Even With Coronavirus + She Reacts: “I Might Need An Extra N***a”

Rap newcomer Blueface and Lizzo could be the next big couple in hip-hop. Buzz has started to generate after the West Coast rap artist shared some flirty words about the Grammy-winning rapper in an interview.

During a recent Real 92.3 LA radio Q&A, Blue didn’t hold back on his appreciation for the Houston native. He took things further by admitting he would not only smash Lizzo if she had coronavirus but wanted her to give him a call.

“I done hit a couple big b*tches in my day. You feel me? Lizzo, call me baby. That’s a wide load right there, you feel me? I might need an extra n*gga, you feel me. [Juicy?] Is it? Is it? Lizzo, if you’re out there and hearing this, call me, baby. Call me. That’s all. I hope so. I’ve knocked a couple big ones down.”

Instead of staying mum, Lizzo made sure to respond to the flirty words. She went to Instagram this past weekend with a freaky pic of herself in her underwear and name-dropped Blue.

In a recent Rolling Stone cover feature, Liz came clean about her future. She specifically opened up to the idea of having an extended family.

For a long time, the future she had perceived for herself was a lonely one — “no children, two friends” — with her head buried in her work. “But it’s different now,” she says with a sigh, dropping the advice-guru voice she delivers her self-help sermons with on- and offstage. “Like my relationship with my family, I’m working on that. I open myself up to friendships. I open myself up to the idea of children, which is big for me, ’cause my albums are my babies.” (Rolling Stone)

The same week, Lizzo blessed social media with some jaw-dropping shots from her cover feature.