R&B singer Chris Brown‘s reportedly always wanted a child to call his own and intended on longtime model girlfriend Karrueche Tran being its mother.

Reports claim Breezy’s disinterest in marrying KT may have derailed their plans to welcome in new life together.

We’re told KT feels strongly about marriage before kids, and stood her ground with Chris. Although he stepped up with a couple of diamonds last Christmas — he couldn’t close the deal … since they weren’t engagement rings. Karrueche was also worried about derailing her budding acting career. (TMZ)

KT made her declaration from Breezy on social media Wednesday (March 4). 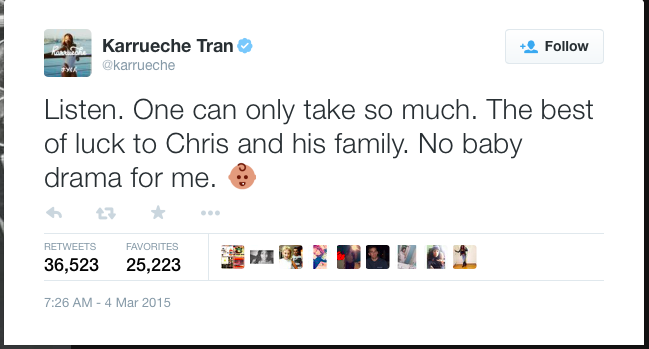 According to reports, Tran hinted at her knowledge of the situation on Twitter a few days ago.

According to reports, Breezy’s baby mother is a 31-year-old former model named Nia.

Sources connected to both Nia and Chris tell us they are on very good terms — however they’re not together romantically. We’re told 25-year-old Chris is happy about being a father. It does not appear there is a formal child support order in place — and we do not know the nature of any informal terms of support. One thing’s for sure … baby girl looks a lot like daddy. (TMZ)

In a recent interview, Brown said the financial risk involved with marriage concerned him the most.

“I’m cool with having a baby, great,” Brown said in his interview. “The marriage thing, I’m not cool with giving you half of what I earn all my life. Pre-nups and all that, that’s cool. I just think, marriage, in our generation, marriage has been distorted.” (“The Breakfast Club”)