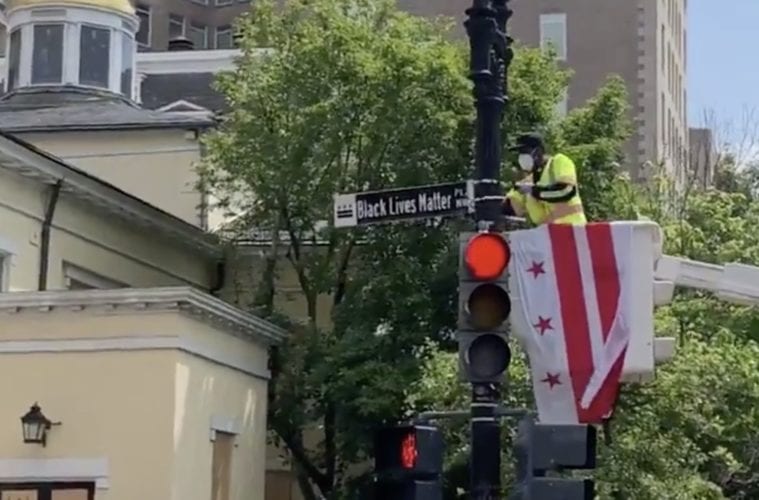 The Black Lives Matter movement is coming to Donald Trump‘s doorstep – literally. The Washington, DC mayor has renamed a street close to the White House ‘Black Lives Matter Plaza’ and has a mural on deck to honor George Floyd protestors.

According to reports, the mayor has also given the green light for city crews to paint a mural honoring peaceful demonstrators at the nation’s capital pushing for a permanent end to police brutality.

Muralists painted “BLACK LIVES MATTER” in roughly 50-foot-wide yellow letters on a section of 16th Street that sits just in front of Lafayette Park, the site of huge protests over the death of George Floyd, a black man who was pinned to the ground with a white police officer’s knee on his neck for nearly nine minutes in Minneapolis. The area — near historic St. John’s Church — is where protesters were forcibly removed on Monday evening just before Trump walked through Lafayette Park to pose in front of the church for photographs while holding a Bible.  (USA Today)

Mayor Muriel Bowser hasn’t received all positive reactions. There are some people taking a major issue with the mayor’s approval of the painted ‘Black Lives Matter’ street and said specific action against law enforcement policies needed to take place.

“This is a performative distraction from real policy changes. Bowser has consistently been on the wrong side of BLMDC history. This is to appease white liberals while ignoring our demands. Black Lives Matter means defund the police.” -Black Lives Matter DC’s Twitter

On Friday, Mayor Bowser specifically called out President Trump. She requested he remove federal law enforcement and military from the city.

“I request that @realDonaldTrump withdraw all extraordinary federal law enforcement and military presence from our city.” -Mayor Bowser’s Twitter

Earlier in the week, Trump’s daughter made an unexpected move in support of Black Lives Matter. Tiffany went to her social media pages to promote BLM by contributing to Blackout Tuesday.