According to reports, a judge has told Wayne he must settle the YMCMB battle before trying to dig into UMG’s pockets.

theJasmineBRAND.com exclusively reports, Lil Wayne suffered a major setback in his $20 million dollar lawsuit against Universal Music – in which he accuses the label of screwing him out of millions in royalties – with a Federal Court judge not allowing the rapper’s case to continue until his legal battle with Birdman is resolved. (theJasmineBRAND)

Lil Wayne’s wardrobe is now doing his trash-talking for him. Weezy’s favorite Birdman slam is emblazoned on a white hat he’s rocking in L.A. It’s a strong hint that Mr. Carter and the Cash Money honcho have made ZERO progress on settlement talks in Wayne’s $51 mil lawsuit. (TMZ)

In late June, Cash Money boss Birdman explained why he would not e-beef with Wayne.

“I’m in it and I know what it is. And one thing about the social media is you can’t correct it. You gotta let it be what it be. It doesn’t even make no sense to even make a comment. It don’t make no sense. People are going to believe what they read so you gotta really know how to rock with that, know how to fall back and when to fall off. That’s how I like at it. [Social media?] I ain’t on it like that.” (Big Boy’s Neighborhood) 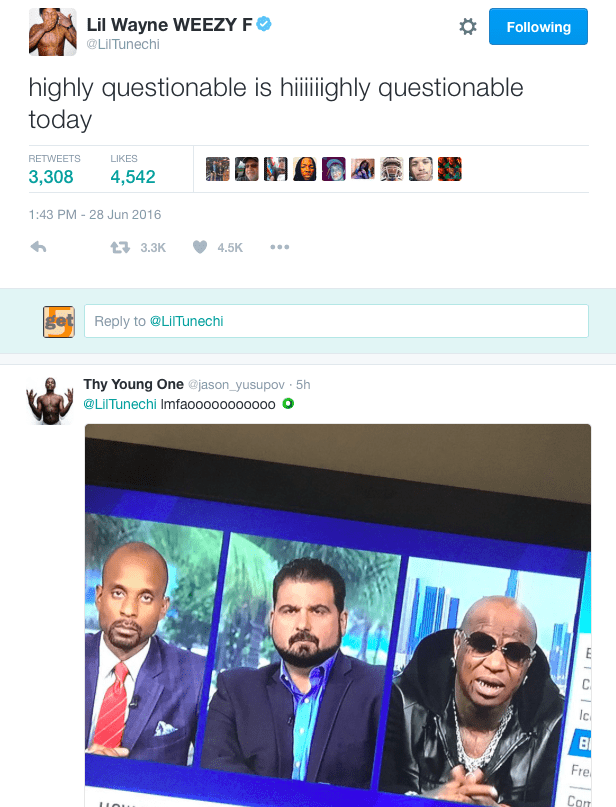 .@BIRDMAN5STAR talks his early years, sleeping on a million dollars ,& playing Lil Wayne in Madden for 10k a gamehttps://t.co/7KXo2EHwqh