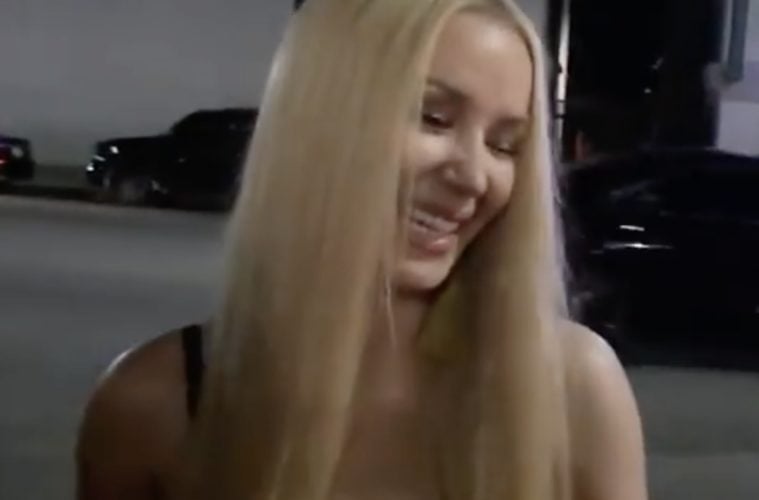 According to BB, she felt the need to approach Iggy over her social media trash-talking.

“It was just water! It was just water. Look, she was talking sh*t on Instagram so b*tch you finna say something then b*tch something finna happen to you. And I can’t get to her because security wouldn’t let me – b*ctch I’m gonna do what I can. I ain’t worried about that b*tch!” (TMZ)

Instead of clapping back, Iggy said she didn’t want to attack a teenager.

According to reports, Bhad struck first by throwing a drink on Iggy.

After E! News’ Erin Lim interviewed both rappers separately on the red carpet at Cardi B’s Fashion Nova launch party at Boulevard3 in Hollywood Wednesday, Bhad Bhabie (real name: Danielle Bregoli) threw a drink on the “Black Widow” rapper inside the venue. In a series of Instagram Story updates later that night, Bregoli defended her actions. “Bye broke bich,” the “These Heaux” rapper wrote. “Bye hoe. Glad u left wit a bag cuz u certainly ain’t making no money from music anymore. It’s simple. Don’t talk all sorts of s–t on the internet n come up to me like u my friend. Some of these hoes like u fake n 2 faced as f–k vbut I’m NOT that bich.” (E! Online)

Recently, Bhabie tried to clown Iggy after she had a publicized tour cancelled.

The run-in comes after Bhad Bhabie, real name Danielle Bregoli, recently took a jab at Iggy after her tour was cancelled, which was a response to Iggy shading her on Instagram. Iggy later filmed herself driving home from the event with some savage words for Bregoli. “I get that this little girl has made a name for herself acting a damn fool on television and online,” she began. (Capital Xtra)

A few hours ago, both Iggy and BB showed their support for Cardi’s new Fashion Nova clothing launch.

you know I had to come out and support my people at @fashionnova 🔥 stream the event live at fashionnova.com or sit at home n do nothing like a dumb lil bich