Grammy-winning singer Beyoncé has come forward with a reaction to this week’s multiple police brutality slayings and demanded people to start taking action.

Queen Bey went to social media and her personal website to speak out on her frustrations. 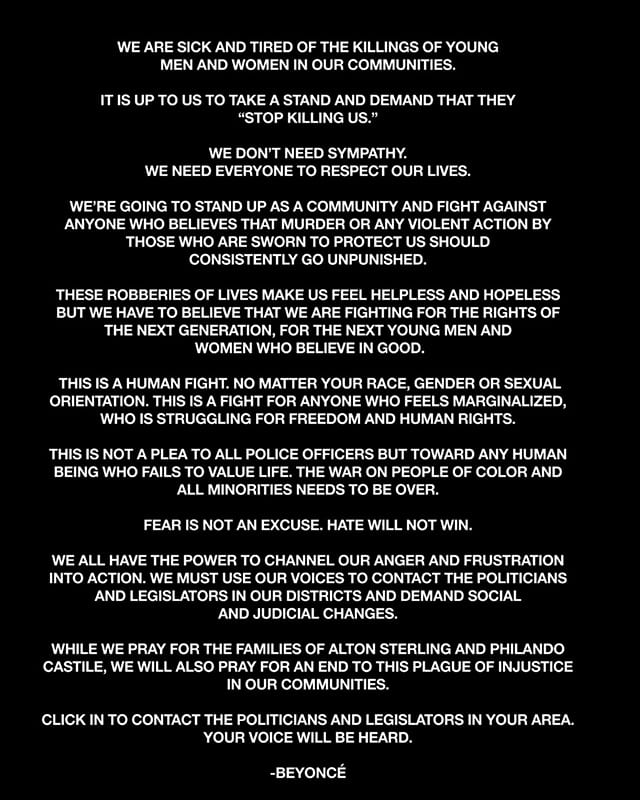 Click the link in my bio to go to Beyonce.com and turn our anger into action by contacting our legislators, councilmen and women. Your voice will be heard.

Less than 24 hours!! Another black man killed at the hands of a police officer. This shit is getting really spooky out here. The black man in America is becoming disposble by the Police!! These cops are walking away with no punishment or on paid leave while Black Men are being murdered, some even on camera!! Obama has got to do something about this before he gets out of office. Please @barackobama address this & Chicago's street violence before you're out of office. If you don't, we have no chance in what's to come. #RipPhilandoCastile

What are you going to do when you're the last BLACK MAN on earth ?!?!? That's a question that someone is going to have to answer one day if they keep killing us like this !!!! #PhilandoCastille shot in cold blood as he sat next to his girlfriend after reaching for his identification as instructed by the officer SMFH !!!! & as soon as his girlfriend posted it… FACEBOOK removed it & DELETED her page !!!! They are exterminating us like we are fuckin rats out here people !!!!!!! I don't have anything cool, educated or peaceful to say… This shit is really fucking krazy !!!!! I cannot believe that a day after #AltonSterling is murdered…. Another white cop kills another BLACK MAN while complying !!!! We are DOOMED whether we stand up or not !!! We don't care like our grandparents & parents did !!!! We are weakened by this new age & purposely blinded by these mothafuckas while they KILL US ALL ONE BY ONE !!!! ITS TAKING EVERYTHING INSIDE ME NOT TO FUEL MY RAGE !!!!!!! THEY DONT HAVE MUCH LONGER !!!!!! CAN YALL NOT SEE WTF THEYRE DOING TO US ??? WE ARE DYING PEOPLE…… DYING !!!

Just landed heard police shot somebody else this is a crazy world we live in. I pray for my kids and and they future.

Oh so we just Gon go for this???? Every so called Hard Core,Real Nigga, Certified,Thug,Goon,Shooter,Hitter,Killa, Gunna,Street Nigga,Trap Nigga, Tough nigga posed to show what they been training for now. If u won't stand up for what's right, You ain't gettin no stripes for doing wrong!!!! #AmerikkkaAintShit #TheyNeverGaveAFuckAboutUS

In a Facebook video, Lavish Reynolds claims that the couple were pulled over in the Minneapolis-St. Paul area for a busted taillight and that her boyfriend, identified by WCCO as Philando Castile, was shot four or five times. She said that Castile told the officer he was carrying a permitted firearm and had been reaching for his wallet before the officer opened fire. (NY Daily News)