[The NBA season (finally) tipped off this week after what seemed like an eternity of an offseason. Instead of a typical preview/prediction post, we’re bringing you some interesting statistics after breaking down each of the 30 rosters. Check them out!] 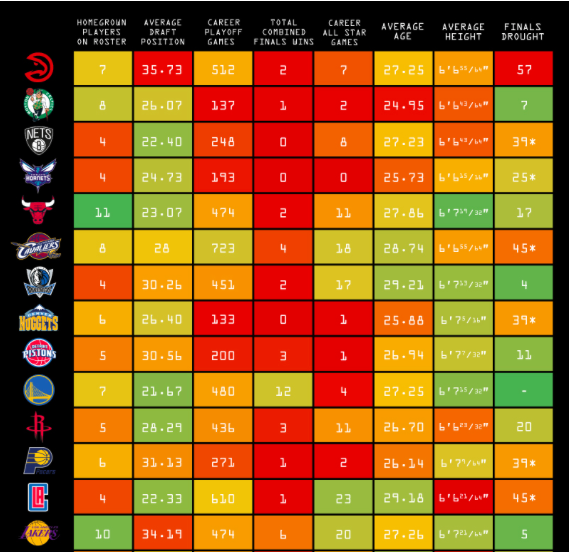 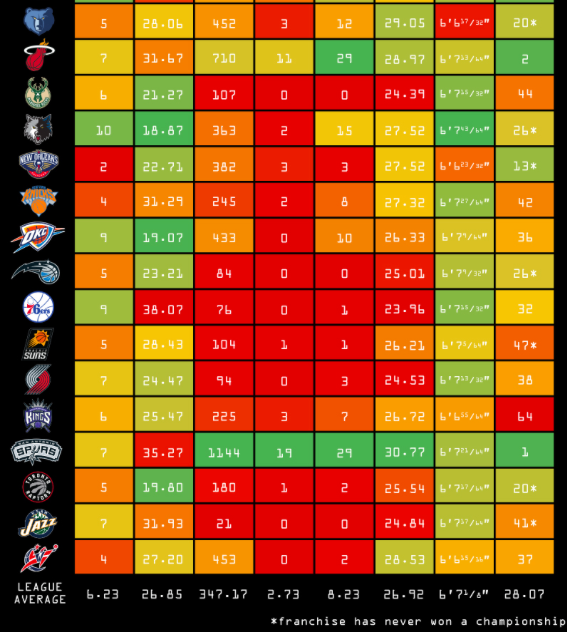 Homegrown Players on Roster: The new CBA has allowed teams to roster up to 15 players at a time and it’s interesting to see how many teams construct their lineups with the draft vs. free agency or trades. The New Orleans Pelicans only have two players that were drafted by the team while 73% (11 players) of their roster are “homegrown” players. (draft day trades are included, so guys like Dirk Nowitzki and Kobe Bryant are considered as “homegrown”)

Average Draft Position: The two teams with the ADP, the Hawks and 76ers, spent last season on the opposite ends of the spectrum. The 76ers have been accused of tanking by loading up their roster with no-names while the Hawks were the #2 seed in the East. (note: if a player went undrafted, we assigned him with the number of the lowest draft pick plus one. In most cases that comes out to 61)

Average age: Many have joked that the Spurs are the senior citizens of the NBA, but they are the only team with an average age of 30+. Meanwhile, the 76ers boast a lineup that averages seven years younger and played a game last night without a player over the age of 24

Total Career Playoff Games: Not surprisingly, the Spurs dominate this category, having played in more than double the playoffs games than all but three other teams. Tim Duncan himself has played in a league high 241 playoff games which comes out to nearly three full seasons of postseason basketball (and more than the combined rosters of 12 other current teams). This year he looks to surpass Derek Fisher and Robert Horry to top the list of most career playoff games in NBA history.