Azealia Banks cuts all her hair off 💇🏽‍♀️ pic.twitter.com/tLCJiQ3bVF

New York rapper Azealia Banks is doing the most right now. The hip-hop artist has practically shocked the entire Internet after deciding to shave her head bald.

Heading into Monday, footage went viral of Banks making plenty of jaws drop from the insane haircut. She went to her Instagram Story to initially share eye-opening before and after moments of her new cut.

“The way these coronavirus cases are going around, I’m very scared to have someone take care of my natural hair – I’m going to keep a baldie and I’m going to rock my wigs. … I’m about to be bald like Seal in this b*tch.” -Azealia Banks’ Instagram Story

Banks made sure to fully embrace the haircut’s aftermath. She returned to her Instagram Story to talk about having the bald look forever.

“I just took my first baldie shower and I’m sitting here thinking that was the most rejuvenating thing I’ve ever felt in my life. I’m about to be bald for f–king ever. That was the best shower I’ve ever taken in my f*cking life.” -Azealia Banks’ Instagram Story

In December 2019, Banks went to her Instagram page and didn’t hold back on speaking out on the white media painting her in a negative light.

Now in 2019, there’s a pill you can take every day that will at a better than 90% chance prevent you from contracting HIV. This pill was approved by the FDA in 2012. The pricing strategy behind it is malicious in my opinion and so it’s public perception is marred and rightfully so. But the fact remains that despite price being a very real barrier to this potentially life saving drug for some, the other very real barrier is awareness – I decided to name, what was otherwise going to be a night of lights and music inspired by an era of clubbing that I loved PrEP+ because while designing the club which is inside of an old glass factory basement in Queens…I started to imagine in an era where so many lives were lost and so much promise was lost forever along with them, what would it have been like if something, anything had existed that in all probability would’ve saved thousands and thousands of lives. I’m an artist, it’s core to my job to imagine realities that don’t necessarily exist and it’s a joy to. A couple days before we threw the party, I was discussing this subject with my team and one of the architects I work with thought that PrEP as a drug had reached ‘100% saturation’ so far as awareness. I thought he was dead wrong so I asked a friend (who I won’t name haha) if he knew what PrEP was and his response was ‘isn’t that some type of viagra or something’. My ex who I was with for several years didn’t know about it when we first met at a gay club in LA. Awareness isn’t always what we’d hope it would be. (Frank Ocean’s Tumblr) 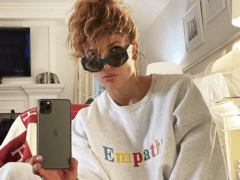