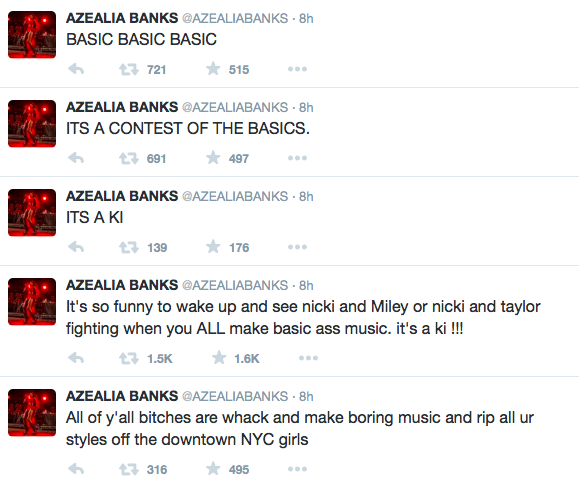 “And now back to this b*tch that had a lot to say about me the other day in the press. Miley, what’s good?!,” Nicki shouted before Miley responded with, “Hey, we’re all in this industry, we all do interviews and we all know how they manipulate sh*t. Nicki, congratulations.” (MTV Video Music Awards ’15)

@nickiminaj does shade better than most. Here she takes on @mileycyrus#VMAs http://t.co/0Wh4cOvCES

“People forget that the choices that they make and how they treat people in life affect you in a really big way. If you do things with an open heart and you come at things with love, you would be heard and I would respect your statement. But I don’t respect your statement because of the anger that came with it. And it’s not anger like, “Guys, I’m frustrated about some things that are a bigger issue.” You made it about you. Not to sound like a b*tch, but that’s like, “Eh, I didn’t get my V.M.A.” (New York Times)

Cyrus also suggested the MTV VMAs did not use race as a determining factor in its nominees selection.

“What I read sounded very Nicki Minaj, which, if you know Nicki Minaj is not too kind. It’s not very polite. I think there’s a way you speak to people with openness and love. You don’t have to start this pop star against pop star war. It became Nicki Minaj and Taylor in a fight, so now the story isn’t even on what you wanted it to be about. Now you’ve just given E! News “Catfight! Taylor and Nicki Go at It.” I know you can make it seem like, Oh I just don’t understand because I’m a white pop star. I know the statistics. I know what’s going on in the world. But to be honest, I don’t think MTV did that on purpose.” (New York Times)