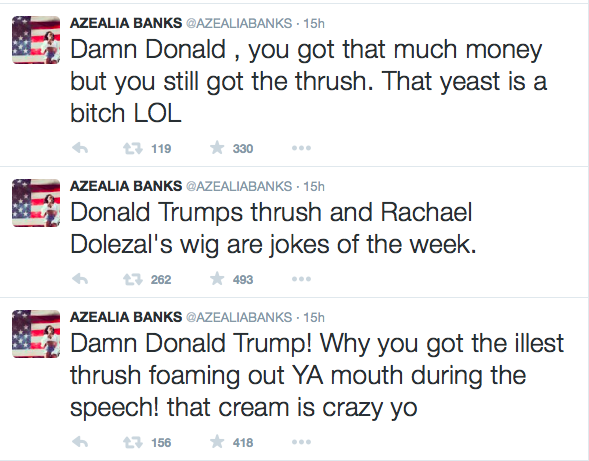 “I don’t like his politics. I don’t think he’d be good for America at all,” Simmons told HufffPost Live’s Marc Lamont Hill on Thursday. “He makes a lot of news. Doesn’t have as much influence as, say, Kim Kardashian. She would probably be a better president, in my opinion.” (Huffington Post)

Mr. Trump used his announcement speech to fire a shot at President Barack Obama and the current state of America.

Trump took a few shots at the land of the free itself, if you can believe it, at several points during his speech. Trump bashed President Barack Obama, but took it further, saying, “The American dream is dead,” and the nation is “becoming a third world country.” (Newsweek)

Many Americans now view him primarily as a reality TV star after 14 seasons of his “Apprentice” series, and his numerous flirtations with a presidential run — first in 1987, then 1999 and again in 2004, 2008 and most recently in 2011 — have left voters eye-rolling as he prompted yet another round of will-he or won’t-he speculation. (CNN)