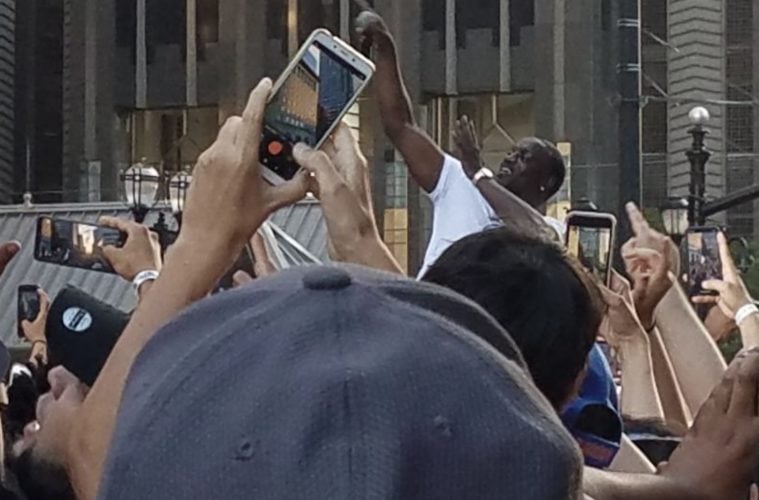 New Jersey native Akon went the extra mile for his hometown this past Independence Day. The hip-hop veteran pulled through for his headlining Jersey City concert and made the Fourth of July ’19 an unforgettable one.

In what looked like a classic rap battle, New York City and neighbor Jersey City engaged in a back and forth freestyle for fireworks supremacy on July 4th.

Last week, JC Mayor Steven Fulop threw out the gauntlet to New York City with an appearance on Hot 97’s Ebro in the Morning Show where he announced that Jersey City’s 50 Star Fireworks celebration would be the #1 fireworks display in America — a direct shot at the current and 43-year crown-holder, NYC.

NYC apparently took notice, firing their first shot just after 9:25 pm over the East River. The show’s theme was “American cinema” and was accompanied by scores of classic yet corny Hollywood songs such as “The Wizard of Oz,” “Star Wars” and “The Godfather. The bursts haloed the skyscrapers and were visible to onlookers on the New Jersey waterfront who initially mistook the blasts as Jersey City’s display.

Moments later, less than a mile away on the Hudson River, the Jersey City 50 Star Fireworks display answered back with a massive boom and continued to batter the sky with the ferocity of a underdog with something to prove.  The gorgeous display included the typical smiley faces and hearts with a few new tricks including a fluttering butterfly.

The only misstep to JC’s perfect execution of a full day of festivities — including a carnival, foodtrucks, gieveaways and performances by Akon and Pitbull —  was the tunes selected to accompany the fireworks. It appears no one told the fireworks musical director that not to play back-to-back anthems promoting your competition — including Jay-Z and Alicia Key’s hit, “NY State of Mind.”

While it’s difficult to say which city won this battle one thing’s for certain — JC put NYC on notice that their standing is no longer a given.  And the people lining the streets along the Hudson and East River got a double-treat with both city’s fireworks displays going all out for their attention.